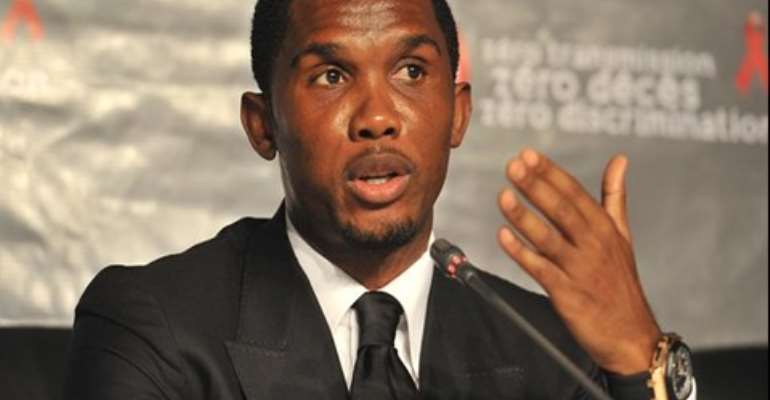 Chelsea have announced the signing of Samuel Eto'o, the Cameroon international, from Anzhi Makhachkala on a one-year contract: and remarkably, with this news, they have now recruited arguably the three greatest players that Africa has ever produced.

Eto'o possibly stands on that proudest of podiums alongside Didier Drogba and George Weah, with only Eusebio, born in Mozambique, and Ghana's Abedi Pele with any competing claim to finish in the medal positions.

Of course, George Weah, though he is the only player to have been named the World, African and European Footballer of the Year - a triple crown that he achieved in 1995 - was far past his best upon his arrival at Stamford Bridge, though he occasionally offered reminders of his greatness.

He is most famous for his length-of-the-pitch solo strike against Verona on the opening day of the 1995-96 season, though perhaps his finest achievement was in a Paris St-Germain shirt, running riot against Bayern Munich in the UEFA Cup. Oliver Kahn, the Germans' goalkeeper, rarely looked so unsettled.

Then there's Didier Drogba, who like Weah was a true centre-forward: the very tip of his team's attacking pyramid, an exceptional blend of acceleration, power and technique.

Drogba was remarkable not so much for the volume of his goals - though he was far more prolific than Weah, who was more of a playmaker - but for his almost pathological ruthlessness in cup finals, where he plundered ten goals in ten appearances.

It is a mark of Samuel Eto'o's magnificence that he may, when all is said and done, stand above either of Weah and Drobga in the pantheon of greats.

Even Lionel Messi, who is as fast off the mark as any attacker in history, cannot say that.

Happily for Chelsea, too, Eto'o combines the swagger of a rock band's frontman with a rare humility, having played wide on the right for Jose Mourinho when the current Chelsea manager came to Serie A. Though Eto'o will presumably be given nothing other than a central brief, this flexibility will provide Chelsea with the fluidity that Mourinho has traditionally demanded from his forward line.

How good will Eto'o be in the Premier League? There is an argument that his performances have waned considerably since his peak, but that should not be heeded too readily.

Though he is now 32, it is only two seasons since he scored 37 times in 53 games for Internazionale, the best single return of any season in his career.

His strike rate at Anzhi remained at just better than one goal in every two games (36 in 71), and he will be galvanised both by this fresh challenge and by three of the best playmakers in world football: Juan Mata, Oscar and Eden Hazard.

He could also be an excellent mentor to Romelu Lukaku, the Belgium international who could well emerge as one of the next great forwards of African heritage.

Whilst Weah's time at Chelsea had the feel of a farewell tour, this is the first time since Drogba that an African forward has come to the Premier League with the threat of being decisive in a championship standoff.

Once Eto'o acclimatises to the Premier League, which should be reasonably soon, we should readily see what has given so many of the world's finest defenders great cause for disquiet. And for that, once again, we have Africa to thank.

Gov't hands over seized rosewood to Trustees of National Cat...
54 minutes ago