Frank Acheampong: “I have not shown my best face” 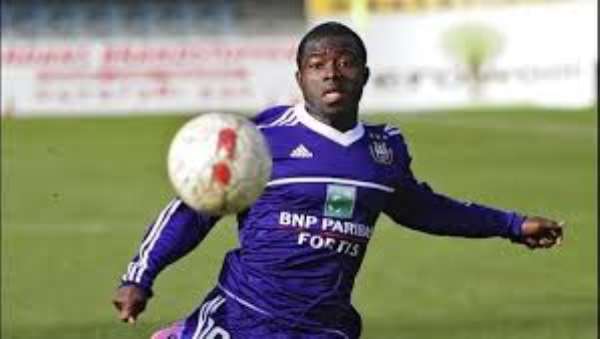 Frank Acheampong is becoming increasingly pampered by the supporters of Anderlecht http://en.africatopsports.com/?s=Frank+Acheampong#sthash.goUHrfPy.dpuf . After a very good U20 World Cup http://en.africatopsports.com/?s=Frank+Acheampong#sthash.goUHrfPy.dpuf , the left-back Ghanaian did not need several matches in the Jupiler Pro League to make impression. With three matches, the 19-year-old impressed the supporters of the club of Brussels.

Last weekend the international Ghanaian Hope has not scored but he delivered a superb assist. The Black Satellite has greatly contributed to the victory of his team 5-2 against Charleroi. Every day, Frank Acheampong keeps making impression by renewing his performance. He helps Sporting by his speed from the left flank. Ghana, the bronze medal!

In an interview with the Belgian newspaper Het Laatste Nieuws the left side thanked his coach for the confidence he gives him notably on the tactical level. “I thought it was better to keep my race. I saw the space and the coach told me that in the opposing half of the field, I can take risks. Even if there are five opponents to pass … “

“I was a little surprised to be honest. But I felt very proud. I'm glad to make the fans happy. I saw a lot of smiles in the stands. After a few weeks here, I feel that I am appreciated in the club. This gives me confidence for the future. I have not shown my best face. I want to do everything to bring Anderlecht at the top of the rankings. “