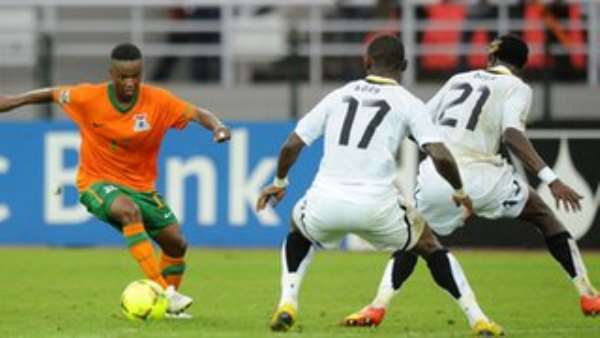 With just about 10 days before the crucial encounter between Zambia and Ghana to be played in Kumasi, most Zambian players playing abroad enjoyed some good run of game time at their clubs while others there was nothing to write home about for some.

Chisamba's impressive performance last week in his first start for his Russian club Ural earned him another starting berth this time on the left side of midfield. The young versatile midfielder completed another 90 minutes but could not help his club as they went down 3 – 2 to Kuban Krasnodar.

In England, Emmanuel Mayuka did not make the bench for Southampton as they drew 1 – 1 at home with Sunderland. Mayuka faces stiff competition in the team with the Saints having acquired a record signing striker who he has to compete with.

In Belgium, Rogers Kola was an 85 th  minute substitute for FC Gent in a game they drew 1 – 1 with Club Brugge. Kola who has so far made five substitute appearances this season clocking 70 minutes in Gent's 5 games.

Jacob Mulenga's FC Utecht got back on track after suffering a humiliating 6 – 0 loss last week to win 2 – 0 at home against AZ.

Mulenga was not on target but completed the entire match.

In Romania, Fwayo Tembo was on the losing end for Astra after they went down 2 – 1 at home to Petrolul Ploiesti to drop into second position.

The Zambian midfielder completed 90 minutes on the day.

In China, James Chamanga continued his dry spell in front of goal as he completed 90 minutes for his club Liaoning Whowin in their win against Qingdao Jonoon. Chamanga has only scored one goal since the 25 th  of May after starting his career at Whowin on a high.

Christospher Katongo also completed the game for Henan Jianye as they went down 2 – 1 to Yanbian Tigers. He was not on target and his team still leads the chase for promotion.

Collins Mbesuma continued to miss in the Orlando Pirates line-up as he was not named on the bench in the Soweto derby which saw his team carry the day against rivals Kaizer Chiefs via a 1 – 0 score line.