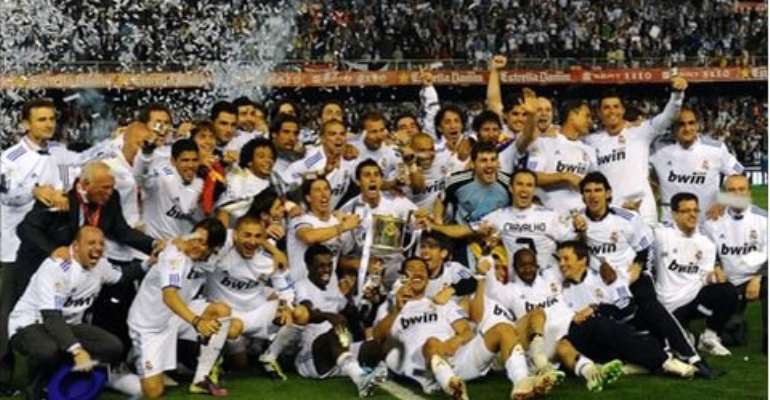 Real Madrid legend Raul scored in front of a packed stadium as los Blancos won 5-0 in an emphatic victory over Al Sadd in the annual Trofeo Santiago Bernabeu.

The 36-year-old rather appropriately started off the party, demonstrating his touch and technique had not deserted him by bringing down the ball expertly from an Angel Di Maria pass before firing a low shot into the back of the net.

It was the sort of goal the club's supporters had come to expect from their greatest-ever goalscorer but they still showed their appreciation and awe at his ability. Minutes later, he hit the post but the crowd erupted, shouting for their hero to be given a national call-up.

Iker Casillas gave him the armband while Cristano Ronaldo gave the striker his No.7 shirt in the first half as part of a fitting tribute for the all-time leading Champions League goalscorer before he switched teams at half-time to play for his current employers.

Further goals were to come for Carlo Ancelotti's men as Isco, who scored against Betis on the opening day, once again found the net before Karim Benzema made it three.

Jese, whose future at the club looks uncertain with the imminent arrival of Tottenham's Gareth Bale, did his best to put himself in his coach's thoughts as he grabbed a double before the end and Madrid eventually declared on five.

Meanwhile, the continued debate about who should be No.1 goalkeeper between Diego Lopez and Casillas was once again played out in public as supporters highlighted the split in opinion amongst some, with a chorus of boos and cheers reverberating around the ground for each of the keepers.

But it certainly did not take the gloss off a wonderful night for an emotional Raul as he said farewell to the Bernabeu faithful in style.