Middlesbrough Boss Adomah Will Continue To Grow Despite Blistering Form 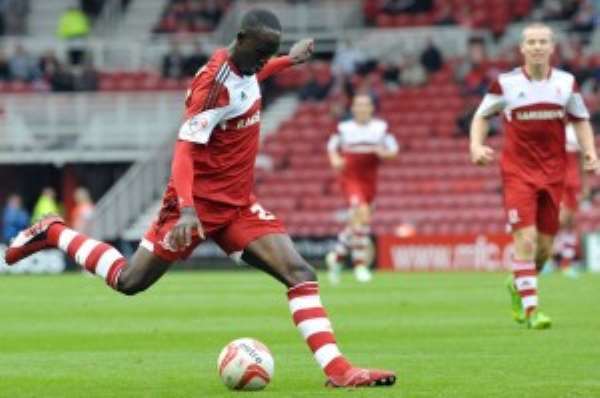 Middlesbrough manager Tony Mowbray says the best is yet to come from Albert Adomah despite the blistering form of the Ghana international since joining the club this month.

The Black Stars winger set up Boro's equaliser in their match against Blackpool in their league match over the weekend.

But they will both take time to produce the goods on a more regular basis.

“What people have to remember is that both of these boys have come here from the lower leagues,” said Mowbray.

“They are learning their jobs and it will take time.”

Carayol showed moments of class and blistering pace in the first half against Blackpool at the Riverside on Saturday.

And in the second half Adomah, who signed from Bristol City this month, came more to the fore and created the equaliser for Marvin Emnes.

“Wingers will have some spectacular days, but show me a winger who will be fantastic in every match,” said Mowbray.

“You live for moments when they skip past defenders. On other days they dribble when they should pass.

“They did alright against Blackpool, but the fans mustn't think that we have Ryan Giggs on one flank and Laurie Cunningham on the other.”

The manager believes that the side will benefit from the extra dimension that the duo will bring, and they will grow into the season and make more of an impact as they adjust to the Championship.