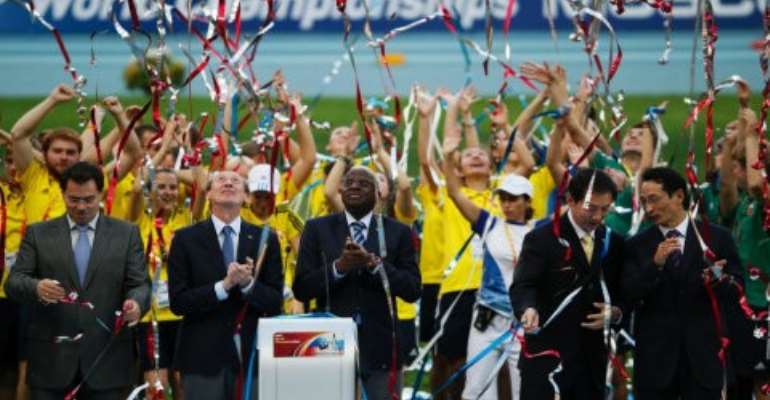 Russia on Monday basked in the glory of its triumph at the World Athletics Championships but the event was shadowed by a controversy over homophobia which now risks tarnishing its hosting of the Winter Olympics and World Cup.

Russian athletes topped the medals table for the first time since 2001 with seven golds, one more than the United States, boosted by a “super Saturday” where the team enjoyed stunning victories in the women's high jump and 4×400-meters relay.

The early days of the championships at Moscow's Luzhniki stadium were burdened by banks of empty seats but the Russian success prompted a last-minute surge of interest and crowds of well over 60,000 for the last weekend.

“Goodbye America!” crowed the Sovietsky Sport daily. “Together we watched a show of world class,” added the Sports Express daily.

By the end, the stadium was caught in a memorable patriotic fervor, with the “Luzhniki roar” whipped up over the PA system by the interventions of Russia's motormouth star sports commentator Dmitry Guberniev.

But no amount of noise could drown out the furore generated by Russia's adoption of a law outlawing the dissemination of “propaganda” about homosexuality to minors, which critics have slammed as patently homophobic.

With the World Athletics Championships being just the first in a string of major sporting events to be hosted by Russia – ahead of the Sochi Winter Olympics in 2014 and football World Cup in 2018 – the controversy now risks only intensifying further.

“This story of course is not over,” grumbled the Sports Express daily. “Its peak is going to come at the Sochi Games.”

No sooner had Russia's athletics queen Yelena Insinbayeva set the championships alight with her stunning pole vault victory than she walked into a moral minefield by backing the law and slamming Swedish high-jumper Emma Green-Tregaro as “unrespectful” for painting her nails in the rainbow colors of gay rights.

Sports Minister Vitaly Mutko minced no words in his backing of the law and sparked further controversy by seeming to equate homosexuality with social ills like alcoholism and drug addiction.

“We are seeking to protect minors – and not just from propaganda of non-traditional relations but from many other things. Like, for example, drug use, alcoholism and smoking. From many bad habits,” he told the ITAR-TASS news agency in an interview.

Mutko gave no indication that Russia would repeal the law, which was signed by President Vladimir Putin in June. “We want to keep children away from unnecessary information and let them make their own choice when they grow up.”

But behind the bluster, some believe that Russia did not expect that the law – which appears to have sprung from a “family values” campaign from conservative lawmakers worried about the declining population – would cause such an uproar.

“They had not thought this through,” said one high-ranking diplomat in Moscow, suggesting Russia has now put itself into a corner with no way to get out.

As the Western press fumed about Russia's stance on gay rights, Russian newspapers hit back by accusing European and US media of seeking to undermine the sporting achievements by the Russian squad.

The depth of anger was shown by a bizarre nationalist eulogy penned Monday by Sovietsky Sport editor Yury Tsybanev about the exploits of the 4×400-meters female quartet who beat the United States for the gold.

“They were standing on top of the pedestal, our four little blondes, four Russian birch trees, and it was as if the blood of our ancestors boiled in my veins,” he said, boasting that our “fair-skinned girls massively beat the black-skinned ones”.

He said the Russian quartet had “genes picked up from Russia's centuries of historic struggle and upheaval”. He added: “Consider this my answer to those 'rights activists' who started pestering and insulting Lena Isinbayeva.”

Interestingly, the respected head of Russia's Athletics Federation Valentin Balakhnichev was among the few Russian officials to criticize Isinbayeva on the issue.

“A sportsperson of such a level needs to think about what they say and where,” he said. “Euphoria does not absolve one from responsibility.”