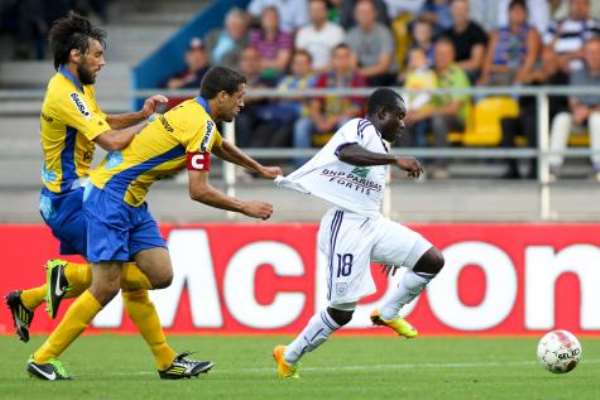 By Akyereko Frimpong Manson
Ghana youth winger Frank Acheampong scored on the second week running as he helped Anderlecht to record a convincing 3-0 win over newly-promoted side Waasland-Beveren in the Belgian Pro League on Sunday.

The 19-year-old was rewarded for his sublime finish against Gent last weekend as Jon van den Brom – the Anderlecht manager, handed him a place in his starting eleven and he paid for it with an 82nd minute strike.

Acheampong, a member of the 2013 Ghana U20 squad that finished third in the FIFA U20 World Cup in Turkey, latched onto a long clearance from Anderlecht keeper Silvio Proto and broke free through three defenders and darted a low drive home for Anderlecht's second goal at the Freethiel-Stadion to help Anderlecht record their third win of the campaign.

The former King Faisal and Berekum Chelsea playmaker was also involved in the sequence of play that fetched the first goal for Anderlecht.

This is Acheampong's second Pro League goal for Anderlecht.

'Visit our lands again and we'll visit mayhem on you' — Chi...
56 minutes ago