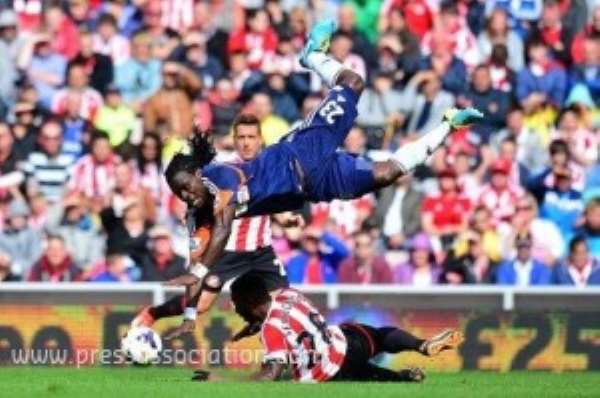 Ghana midfielder Derek Boateng made his dream English Premier League debut on Saturday as he was in Fulham's starting line-up when they played Sunderland in their first game of the season.

The 30-year-old started the match in the opening game of the season for the Cottagers sealing his utmost desire to play in the English top-flight.

However he got his first yellow card his Premier League career after 23 minutes.

Boateng was shown the yellow card for persistent infringement after fouling Emanuele Giaccherini.

The Ghanaian joined the Cottagers in a dream move in the summer after his career took him to several countries.

But it was his utmost desire to play in the English Premier league before he retires after several previous attempts to sign for Middlesbrough and Aston Villa failed.

He got his wish in June when he signed a two-year contract with Fulham after Martin Jol persisted to sign the Ghana international.

The 30-year-old was a long-standing target of Jol, who had attempted to bring in the Dnipro midfielder on several occasions before.

The Ghana international midfielder had looked set to join the Cottagers in the January transfer window but the move fell through when Dnipro pulled the plug just before the deadline.

Boateng's transfer had to be put on ice previously due to contract disputes with his Ukrainian club, but the deal was completed in the summer paving the way for him to play in his favourite.

Boateng has been capped 46 times by Ghana and has brought a big work-rate and plenty of energy into the Cottagers' midfield this season.