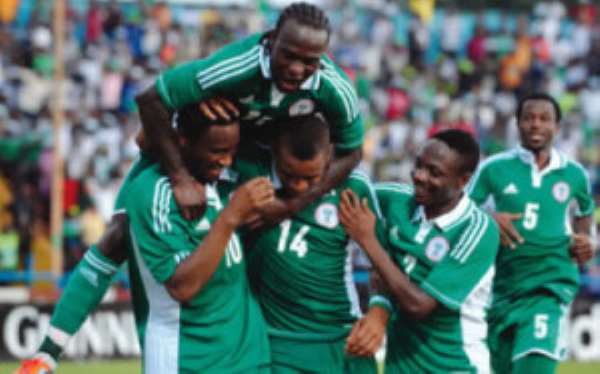 http://en.africatopsports.com/wp-content/uploads/2013/08/Super-Eagles-360x2251.jpg Nigeria won 2-0 in Durban on Wednesday in a friendly match counting for the FIFA Day. A meeting also included in the program of the 18th edition of the Nelson Mandela Challenge . The Bafana Bafana will therefore have nothing to gloat to their former president.

After a blank first half (0-0), the second was busier. Stephen Keshi lacked several of his great men. But a winning coaching will change things. Uche Nwofor entered to replace Shola Ameobi confirms the confidence of his coach. He opened the scoring just two minutes after walking over the lawn, a beautiful heel.

At the 68th, Nwofor doubled the bet. A very well built goal by Moses and Ahmed Musa . A nice preparatory meeting for Keshi and his foals who are confronting Malawi for the ultimate of the 2014 World playoffs. The Flames were in when they won 1-0 against Rwanda on Wednesday.