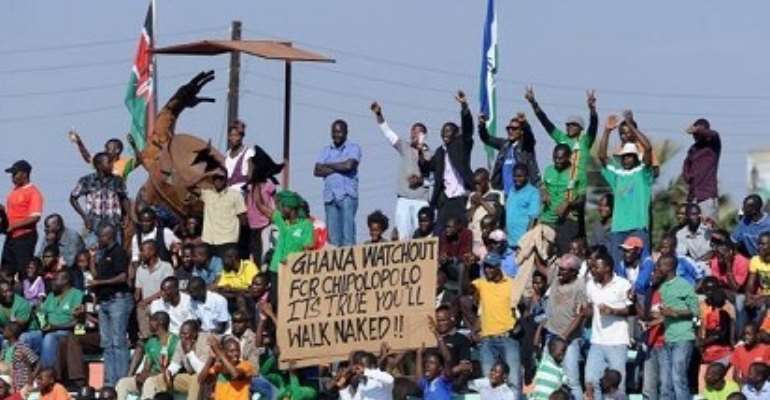 Zambians are jittery over their clash with Ghana

Jittery Zambia players say Wednesday's friendly against Senegal will give them an insight of what to expect in the final Group D 2014 Brazil World Cup qualifier against Ghana in September.

The Chipolopolo will play the Teranga Lions in a friendly in Paris on Wednesday to help them prepare for their final 2014 group World Cup qualifier in Kumasi next month.

But the Zambians who have been dominated by thoughts of Ghana claim the match against Senegal will give an idea of the Black Stars when the two West African sides have different styles of play.

While the Senegalese rely on their power, the Black Stars use their skills and pace to their advantage which will give nothing away as far as the match in Kumasi in concerned.

Defender Himonde said the international friendly is important because it will give the Chipolopolo an understanding of what to expect from the Black Stars on September 6 at Baba Yara Stadium in Kumasi.

He said like Ghana, the core of the Senegalese players are based in Europe and the match will gift the Chipolopolo with stiff competition.

“It will give us a picture of what to expect from Ghana because the Senegal squad has most of its players playing for clubs in Europe just like the Ghanaians,” Himoonde said.

He said Zambia's 2-1 win over Senegal at the 2012 Africa Cup of Nations will be put behind when the teams.

His partner in defence both at club and country, Sunzu said he was excited to make a comeback to the national team and was ready to play for the country.

Sunzu said the international friendly was important for the Chipolopolo because it is a build up to the crucial match against the Black Stars.

“It will be a tough game but this will help us in the build up to the Ghana match. I m ready to play and I think Ghana cannot beat us” said Sunzu, who has recovered from a knee injury.

Kalaba said: “The Ghana game is very crucial but the friendly will help in building confidence before our final group game. It is not going to be easy to play in Ghana but this friendly will give us a lift.”

Equally, Kalaba missed Zambia's two previous 2014 World Cup qualifiers. Sinkala said the significance of the friendly is that it will give the Chipolopolo and the nation the momentum going into the final group qualifier.

“Everyone will be focused on this game to give us confidence for the Ghana match. We will work hard although it is not going to be easy,” he said.

The Teranga Lions face the Chipolopolo at Saint – Leu-la-Foret, near Paris, in a build-up match for the 2014 World Cup qualifiers slated for September.

Senegal, who will face Uganda need a draw to progress to the final round while, Zambia with a point behind leaders Ghana must beat the Black Stars to qualify.