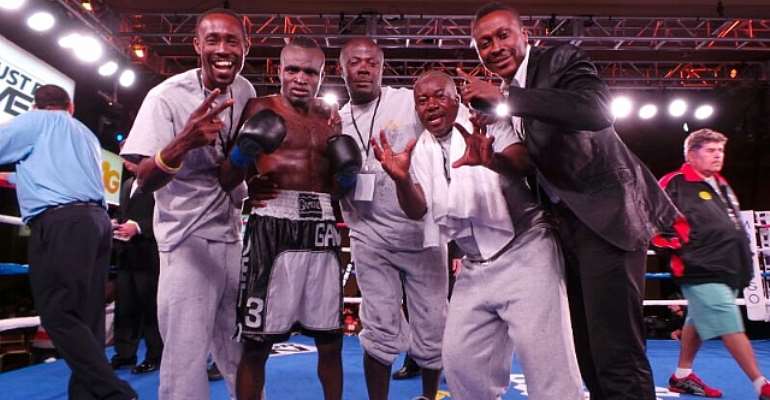 The 23-year-old stopped his American opponent in the 9 th  round of the main event hosted at the Morongo Casino Resort & Spa in Cabazon, California to win the vacant IBF Intercontinental Super Featherweight title early Saturday morning – a bout that was funded by Black Stars captain Asamoah Gyan.

This huge win ensures the plan to have 'Game Boy' secure Ghana's next boxing world title remains on course.

The James Town born fighter had to do it the hard way to make Ghanaians and his management led by Asamoah Gyan proud.

Majority of the boxer's office staff and the media had been denied visa in order to travel to the US to offer administrative and moral support.

Tagoe taking instructions before the bout on Saturday

This threatened to wane Tagoe's confidence ahead of the bout as he appeared deserted in the US with only his trainers and personal manager Baffour Gyan to fall on.

But this actually fueled the boxer's determination to go all out to ensure he remains in line for a world title fight.

His 9 th  round knockout win shocked the predominant American crowd who had attended the fight in their numbers in anticipation of an easy win over the diminutive but loud-mouth Ghanaian.

The win on Saturday now extends Tagoe's record to 23 wins – 10 by way of knockout.

He is expected to be given a warm welcome on his return to Ghana as he reorganizes himself for his next overseas fight which could possibly be for a world title.