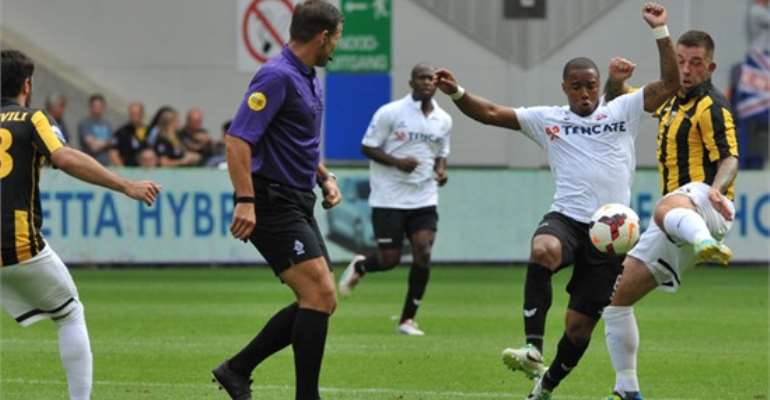 By Akyereko Frimpong Manson
Experienced goal merchant Matthew Amoah marked his debut for Heracles Almelo by scoring a late consolation in their 3-1 loss to Vitesse Arnhem in the Dutch Eredivisie opening weekend.

Amoah, 32, came off the bench just before the restart at the GelreDome in Arnhem and as demonstration of his lust for goals, he scored a clinical finish second-half stoppage time for the travellers.

The former Black Stars regular joined Heracles just on Friday after signing a season's contract as a free agent and he showed what he has install for Heracles with a typical Matthew Amoah finish.

Vitesse went 3-0 ahead before 18,000 home fans and had already wrapped up the maximum points at stake but Amoah cut down the deficit to 2-0 just before the final whistle.

During pre-season Amoah earned a reputation of being the most prolific scorer in Holland after scoring 18 goals in 6 games for NAC Breda where he spent close to a month on trials but failed to secure a deal.

Kwame Quansah who plays in midfielder also lasted the entire regulation minutes of the game for Heracles as he tasted defeat in their opening game of the season.