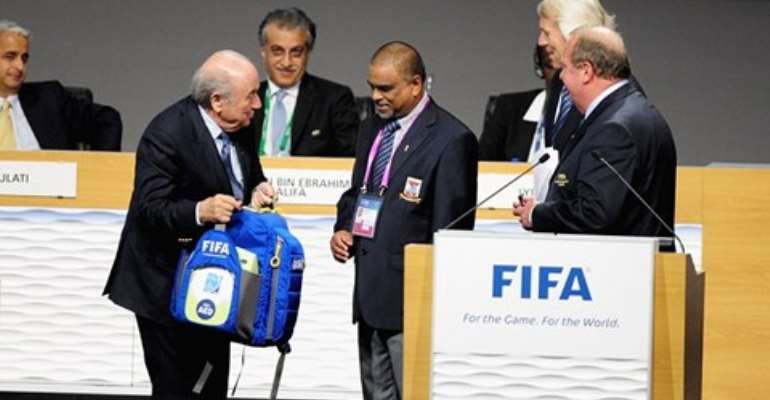 The odds of footballers across the world surviving an on-pitch sudden cardiac arrest may be significantly improved with today's announcement of the new FIFA Medical Emergency Bag (FMEB) which will be issued to all of FIFA's 209 member associations.

Presenting the FMEB backpack to the congress delegates, FIFA's Chief Medical Officer Professor Jiri Dvorak, said pitch-side medics and first responders will be trained to use the potentially life-saving technology. The critical element of the FMEB is the automated external defibrillator (AED), easily visible in a clear pocket at the front of the bag. This portable device can immediately diagnose suspected heart problems and defibrillation can be initiated if the heartbeat appears weak, irregular or has stopped altogether. The bag also holds an instructional video and a medical emergency kit.

“Global use of defibrillators is one of the highest priorities for FIFA in our battle to prevent sudden cardiac death on the pitch”, explained Michel d'Hooghe, Chairman of the FIFA Medical Committee. Prof Dvořák added: “The high specification of equipment in each one of these bags comes as standard and is a first for the world of sport. We hope that the FIFA Medical Emergency Bags will lead the way for other sports federations to adopt their own safety bags”.

Poignantly, the congress delegates were reminded of the upcoming 10th anniversary of the death of Marc-Vivien Foe, the Cameroonian international midfielder who suffered a fatal heart attack on the pitch, at the age of 28, during the 2003 FIFA Confederations Cup in Lyon, France. Other high profile cases include Fabrice Muamba, who suffered a cardiac arrest during an English Premier League match in March 2012. He recovered despite his heart having stopped for more than an hour, thanks in part to the fast action taken by medics who used a defibrillator on the sidelines.

In the decade since Foé's death, F-MARC, the FIFA Medical Assessment and Research Centre, has worked together with the world's leading researchers in sports medicine to introduce new measures to tackle sudden cardiac arrest. Medical examinations are now conducted prior to all FIFA competitions for all players and referees to help to identify those who are predisposed towards cardiac issues. F-MARC has also developed education programmes for sports physicians, paramedics and sideline medical staff to deal with the immediate response and treatment of SCA in the critical minutes after a collapse.

The lifesaving medical kit is contained in a bag chosen by the team at F-MARC who carried out extensive research into the most hardwearing design for the FIFA Medical Emergency Bags. A similar model of bag is currently used by the US and South African armies.

As well as being sent to all 209 of FIFA's Member Associations, the FIFA Medical Emergency Bags will be also be introduced pitch-side at all the stadiums hosting matches at the FIFA Confederations Cup in June 2013.

She even wears knickers to wash in the compound — Takoradi w...
30 minutes ago