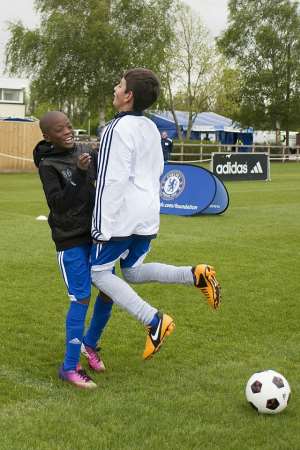 A superb injury time Ivanovic header secured for the London Blues, the UEFA Europa League trophy in a cracking game that kept everyone football fan at the edge of their seat at the Amsterdam Arena last Wednesday.

This unique victory had a quick reaction back home at the Stamford Bridge where the Samsung 'Dream the Blues camp is currently ongoing.

The night was filled with celebrations and joy with the young participants of the campaign becoming more inspired than ever by their mentors. The participants, numbering 14 from all corners of the globe expressed their excitement and readiness in anticipation of meeting their football idols in the coming days.

The activity-packed campaign which is now in the third day continues to give the young and aspiring footballers a unique camp experience. After their morning training session at the Cobham Training Center (Chelsea FC's training ground) in London, participants were given a special lunch treat at one of the popular grills at Stamford Bridge: Frankie's Bar and Grill, a sports bar which happens to be a trademark name in the industry in the whole of Europe.

Later in the day, they took a tour of Stamford Bridge and had the opportunity to re-live some of the historic moments in the club's history. 'Seeing all the achievement and history really motivates me to believe that with hard work and determination, everything is possible'; these were the words of one of the participants during the epic tour.

The Marketing Manager for Samsung Ghana, Richard Nunekpeku who was part of the activities was particularly excited to see how the young aspiring footballers looked motivated and charged up more than ever to reach for their goals: 'Samsung is all about empowering people to live to their fullest of potential and I find it very inspiring to see our brand making the dreams of these young footballers a reality.' - He noted. 'This is a reflection of our goal as an organisation to keep bringing to the masses, smart products and innovative technologies to make their lives better', Mr. Nunekpeku added.

They also toured the megastore, also at Stamford Bridge where some of the accompanying parents used the opportunity to get for their wards, various souvenirs from one of the biggest sports retail stores in the world. Before closing the chapter to the day's activities, the entire team gathered as one big family at the plush Rainforest Café for dinner.

The campaign is an expansion of Samsung-Chelsea FC Youth Football Camp program, which is an ongoing effort of the company since 2007, benefiting and inspiriting more than 6,000 youths from around the world of 9 to 13 years old.

The campaign will end on the 20th of May, but until then, the beautiful experience continues for these 14 lucky kids, kind courtesy Samsung Electronics a global electronic giant with a strong zeal to offer nothing but the best in life to all.

Samsung Electronics Co., Ltd. is a global leader in consumer electronics and the core components that go into them. Through relentless innovation and discovery, we are transforming the worlds of televisions, smartphones, personal computers, printers, cameras, home appliances, medical devices, semiconductors and LED solutions. We employ 227,000 people across 75 countries with annual sales exceeding US$143 billion. Our goal is opening new possibilities for people everywhere. To discover more, please visit www.samsung.com.

Samsung who works with Chelsea FC in doing good for the local and global community – are giving the opportunity to train the next generation of football players through the Samsung-Chelsea FC Youth Football Camps. Designed to encourage children aged 9-13 to pursue their dreams and nurture athletic talent, the children will learn “The Chelsea Way” through a series of skills drills designed to help refine their control, shooting, dribbling, and passing during the half-day camps.
Having been the sponsor of the program since 2007, Samsung has contributed to expanding its outreach globally from 2011, which originally was a grass root program initiated by Chelsea FC in the UK. Since 2007, approximately 6,000 kids from around the globe have benefited from the Samsung-Chelsea FC Youth Football Camp.

Latest Photo Reports
Catch up with all the political quotes from our politicians.
Advertise here
More from International
ModernGhana Links
BIBA cancels all February 2021 events...It would be Criminally Negligent to authorise events in February, says BIBA VP
Commonwealth To Unveil ‘4D Strategy’ On Reviving Sport At Ministerial Forum
Romelu Lukaku Before The BVB-Dortmund Game: The Man Who Wanted To "Destroy" His Opponents
TOP STORIES

NPP flagbearer race: Alan Kyerematen is coming, I'm not an e...
19 minutes ago

Agenda 111 delayed because of location disputes, but I will ...
27 minutes ago