Issac Vorsah : The Ghanaian international has lost his dad! 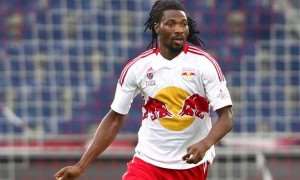 The Red Bull Salzburg guardsman is part of the 24-man squad called for the 2014 World Cup qualifying game against Sudan on Sunday.

The former Hoffenheim defender arrived in Ghana on Monday to join the rest of the squad for the crucial game.

The death of his father is the recent to have hit the national team following the death of Asamoah Gyan's mother, the demise of Anthony Annan's father and John Boye.

Captain Gyan buried his mother just this weekend.
It is, however, not clear if the rearguard would be playing on Sunday.