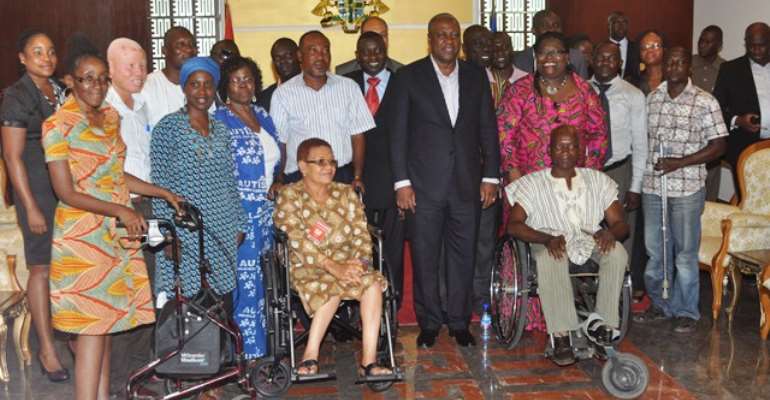 Accra, March 18, GNA- President John Dramani Mahama on Monday tasked Metropolitan, Municipal and District Assemblies not to give permit to developers whose building plans do not make adequate provision for persons with disabilities.

He gave the assurance that government would also reconstitute the Disability Council with committed and competent persons who would continue to fight for the betterment of persons with disabilities.

President Mahama gave the directive when members of the Federation of Persons with Disabilities called on him at the Flagstaff House, Kanda.

He said persons with disabilities do not need sympathy from any Ghanaian, but rather their full integration into the society without discrimination.

President Mahama said he would refer the Federation's demand for a cross-country vehicle to the Chief of Staff, and assured the body of a positive response.

Mr Yaw Ofori-Debrah, Spokesperson for the delegation appealed to the government to encourage many television stations to use the sign language to get persons with disabilities closer to government policies.

He called for the teaching of sign language in the training colleges to facilitate its use nationwide.