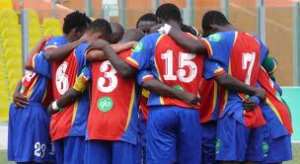 57733
Accra, March 17, GNA - Accra Hearts of Oak continued with their steady upsurge in the Glo Premier League with a 3-1 victory over Berekum Arsenals at the Accra Sports Stadium on Sunday.

Having exhibited an improved performance since the commencement of the second round of the league, Hearts looked the more favourite side to win the day as they ensured constant pressure on their opponents in search of the opener.

Hearts succeeded with 33rd minute goal from Romeo Agban, who picked a through pass from Mahatma Otoo, raced deep into the vital area before placing the ball behind keeper Henry Yartey for the first goal.

Otoo, could have increased the tally in the 41st minute but the cross to denied him the goal, whilst Arsenals made occasional efforts to reduced the deficit before the close of the half, but Douglas Nkrumah's efforts were thwarted by the Hearts defence.

Hearts increased the tally in the 60th minute, though a curling free-kick delivered by Esme Mends at the edge of the vital area, but Arsenals pulled one back in seven minutes later through a penalty.

This was after Heart's Owusu Bempah had brought down Kwesi Donsu in the vital for referee O.B. Amankwah to whistle for a penalty.

Nkrumah converted it for Arsenals.
Hearts sealed their victory in the 76th minute, when Otoo rose above the defence men of Arsenals to head home a corner kick from substitute Yakubu Musa.

Arsenals were unable to put up a fight to redeem their image as the game was brought to an end.

The victory keeps Hearts out of the relegation zone, as they now occupy the 12th position with 22 points.