Champions League : The Draw of the quarter finals -Videos- 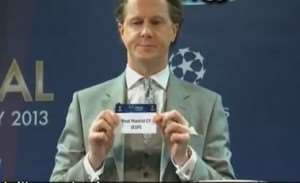 As Africa Top Sports previously announced you, Paris Saint-Germain meets Barcelona in the quarterfinals of the Champions League.

A difficult challenge for Ancelotti and his players who will first receive Messi at Parc des Princes without Zltan Ibrahimovic suspended for having received a red card during the match against Valencia.

For PSG coach Carlo Ancelotti, “Barca is more likely to win” because “they have more experience.”

Galatasaray of Didier Drogba will face Real Madrid; while Malaga is in its first quarter-final of a European competition will face Borussia Dortmund.

The matches of the quarterfinals of the Champions League