Greece: Olympiakos and the Algerians, Djebbour and Abdoun champions! 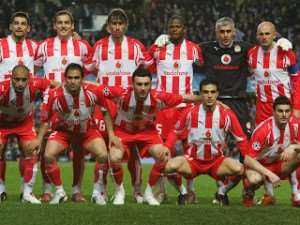 Olympiakos has won the 40th championship of Greece in its history after its victory at AEK Athens (3-0) this Sunday on behalf of the 25th day.

Defeated once in the league, Olympiakos secured 21 wins and three draws and 16 points ahead of the Asteras Tripolis in five days of the championship: Nothing can happen to the Greek capital club even if it loses the last five meetings.

The Algerian Djamel Abdoun attended the celebration of this success by scoring the third goal after the doubling of the Greek international, Avraam Papadopoulos (13th and 56th).

And yet, the club had experienced difficulties related to the financial crisis in January with the sacking of coach, Leonard Jardin replaced by Antonios Nikopolices .