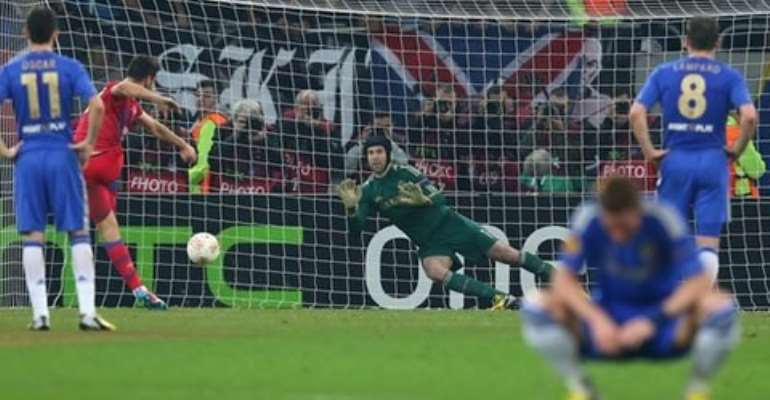 Raul Rusescu struck a first-half penalty to give Steaua Bucharest a narrow advantage in their Europa League last-16 tie against Chelsea.

Rusescu struck his 23rd goal of the campaign after he was fouled by Ryan Bertrand as they competed for a cross.

Cristian Tanase narrowly missed from 20 yards for Steaua in the second half after good work by Iasmin Latovlevici.

Steaua, who hold a 12-point lead at the top of the Romanian top division, enjoyed the greater share of what few chances there were, cheered on by a crowd that included ex-Romania captain Gheorghe Hagi, former US and French Open tennis champion Ilie Nastase and the country's Prime Minister Victor Ponta.

Chelsea interim manager Rafa Benitez, whose team face an FA Cup quarter-final at Manchester United on Sunday, made five changes to the side who defeated West Brom 1-0 in the Premier League last Saturday.

Fernando Torres replaced the ineligible Demba Ba, cup-tied after playing for Newcastle in the Europa League this season, while John Terry, Ryan Bertrand, John Obi Mikel and Yossi Benayoun also came in, with Victor Moses and Ramires left at home, and Ashley Cole and Mata dropping down to the bench.

Chelsea weathered a spell of early Steaua pressure without too much difficulty, with the home side restricted to one long-range effort from Alexandru Chipciu in the opening half-an-hour.

The European champions struggled to create many early openings themselves, though, as they were restricted largely to threatening from set-pieces in a frustrating first half, during which a number of their players were targeted by a laser pen directed at them from the crowd.

They went behind in the 34th minute, when Bertrand was judged to have fouled Rusescu as they challenged for Latovlevici's superb left-wing cross.

Rusescu, Romanian domestic football's leading scorer, picked himself up to strike the resulting penalty low and hard into the corner, although keeper Petr Cech got a hand to it.

Chelsea began to apply a greater degree of pressure after going behind, with Eden Hazard setting up Benayoun for a low shot from the edge of the penalty area, which Steaua keeper Ciprian Tatarusanu got down to push aside.

Tatarusanu was alert again moments later to beat away a snapshot from Torres, but the keeper was otherwise untroubled in the opening 45 minutes.

The impressive Latovlevici continued to cause problems as an attacking left-back in the second half, delivering a cross that Chelsea struggled to clear before Chipciu set up Tanase to drive a low shot wide from 20 yards.

In contrast, Chelsea remained uninspired even after Mata came on to replace Benayoun in the 64th minute.

Hazard had a half-chance with just over 15 minutes to go, firing over from a tight angle when Torres nodded the ball into his path.

Marin almost snatched a late equaliser after coming on as a substitute, cutting in from the left to hit a low right-foot shot that Tatarusanu pushed out at the near post, while David Luiz hit a free-kick just over.

But Benitez's side could not score, and have work to do at Stamford Bridge to turn the tie around in the second leg next Thursday.