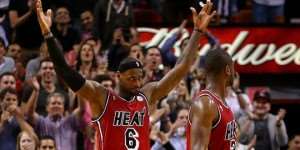 Nothing seems to stop Miami.
The days go by and look for the reigning NBA champion.

Dwyane Wade had 32 points, 10 rebounds and seven assists, LeBron James shrugged off a sore left knee to score 20 points and grab 10 rebounds, and the Miami Heat earned their franchise-record 15th straight victory with a 97-81 win over the Minnesota Timberwolves on Monday night.

Chris Bosh added 11 points and nine rebounds, and James played 35 minutes despite being listed as a game-time decision with a twisted left knee.

Derrick Williams had 25 points and 10 rebounds and Ricky Rubio had 14 points, eight assists, six steals and five rebounds for the Timberwolves. J.J. Barea had four points on 1-for-11 shooting and was ejected in the fourth quarter after getting a Flagrant-2 foul for a hit on Heat guard Ray Allen.

Minnesota was down six points with eight minutes to play when Barea was ejected. The Heat then went on a 17-5 run to put away the game.