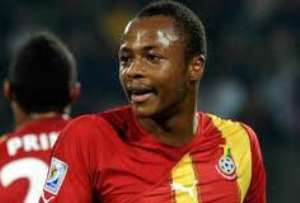 Dede Ayew earlier on with his younger brother sent message to GFA on their temporal retirement from the Ghanaian national football team.

Andre Dade Ayew the son of the Ghanaian legend Abedi Pele has revealed that he can no longer cope with the psychological trauma he is suffering as a result of the strained relationship between him and Black Stars officials.

In a letter to the Ghana Football Association Ayew pointed out the pre-AFCON issue coupled with how other matters made it difficult affected him in giving his best for Ghana.

'Finally, I hereby affirm my avowed love, devotion and commitment to my beloved country the Republic of Ghana whose national teams I have pledged to always faithfully, stated Andre Ayew.

Dede Ayew was dropped from the AFCON 2013 squad after been reported to have appeared lat to camp whiles treating an injury.