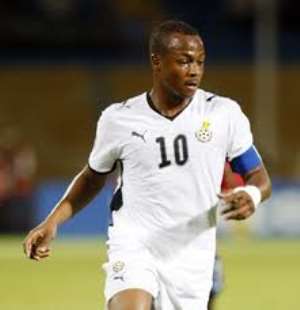 Accra, Feb. 27, GNA - France-based midfielder Andre Ayew has cited his strained relationship with members of the management team for his decision to withdraw his services from the Black Stars temporarily.

The 23-year old together with younger brother, Jordan, formalized their intentions to temporally stay off the Black Stars in separate letters last Tuesday, with their absence from the team for the just ended Africa Cup of Nations in South Africa serving the tone of the decision.

Andre unlike Jordan who failed to even make the 26-man provisional squad, was axed for reporting late to the team's training camp in Abu Dhabi, United Arab Emirates in the build-up to the tournament.

'My decision to withdraw my services from the national team results from a number of issues or matters that have occurred quite recently, especially with regard to my relationship with the management team of the senior national team, the Black Stars.

'These matters have so affected me emotionally and psychologically such that I am unable presently to offer the best of my services to my dear nation.'

The 2011 British Broadcasting Corporation (BBC) African Footballer of the Year opined that the decision would help him put himself together for his return in the undefined future.

He emphasized also on the fact that other players of the Black Stars have gone the same route and returned stronger. In the past Michael Essien, Kevin Prince Boateng and Asamoah Gyan have charted the same course.

'My decision is not novel. Some of my colleagues who have previously taken such decisions have returned more strongly and with vigour to serve the nation.'

Ayew was due to make his return for the Black Stars in next month's 2014 FIFA World Cup qualifier against Sudan in Kumasi.

Meanwhile, the GFA has yet to comment on the issue.