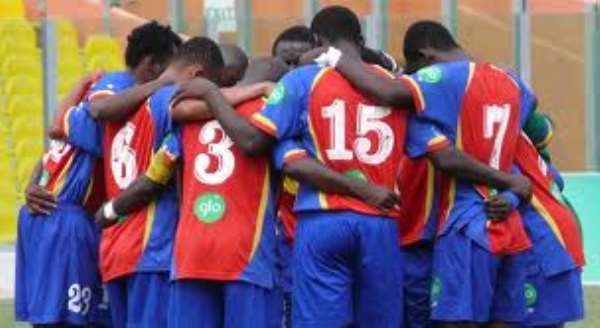 Accra, Feb. 24, GNA - Accra Hearts of Oak managed a lone goal victory over King Faisal in the 16th week league game of the Glo Premier League at the Accra Sports Stadium on Sunday.

Though the league was returning to action after almost a month's break, there was no sign of match rustiness from both sides as they sold out an exciting game to football fans at the stadium with an end-to-end action.

Faisal, came close to scoring in the 14th minute but Joshua Akoto's feeble shot rolled across the goal post to deny his side the lead, whilst Joseph Mugre over kick in the 21st minute hit the cross bar.

The visitors however had to end first half with a numerical disadvantage after Tetteh Nortey pulled down Winful Cobbinah and was show the red card by referee Cecil Fletcher.

However this did not show in the output of Faisal throughout the game, as they exhibited resilience especially in defence and midfield.

Hearts, who were slightly on top of the game in one of their usual raids in the area of Faisal were awarded a penalty after a defender of the Kumasi based side handled the ball in the vital area.

Reuben Gnagne converted it for Hearts in the 68th minute and this eventually became the match winner as efforts by Hearts to increase the tally failed with Faisal also making fruitless efforts to score as well.

Hearts will thus move up from the relegation zone with the win.