Afcon Under 20: Goalless draw by Egypt and Nigeria in friendly 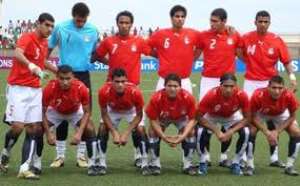 Hosts, Egypt held Nigeria's Flying Eagles to a goalless draw in a second warm-up game preparatory to the 2013 AYC on Friday night in Cairo.

Egypt U20s, who lost the first match 3-1 also in Cairo on Wednesday, stepped up their game in this rematch.

According to the Nigerian team Media Officer, Samm Audu, the Egyptians created the better chances especially in the first half, but poor finishing or some resolute defending by Nigeria ensured there were no goals going into the break.

“Ahmad Muhammad saw his shot after 14 minutes gathered by goalkeeper Jonah Usman and three minutes later, Holland-based Faris Afifi carved a great opening only for Usman to block his final effort for a corner.

He said Egypt continued to enjoy more of the ball and in the 36th minute, big striker Omar Basam Muhammad was clear of goal only for the Nigeria defence to rally round and thwart his goal-bound move.

According to Audu, the Flying Eagles could well have taken the lead against the run of play late in the first half.

“In the 50th minute, Egypt again were denied by the post, before Ajagun missed an open net in the 52nd minute as the Flying Eagles became more daring.

Ajagun, who scored one of the goals in Wednesday's first clash, almost gifted the Young Pharaohs an own goal in the 63rd minute, when his clearance inside the box came off the crossbar.

“Goalkeeper Usman then made a big save on 83 minutes and in stoppage time substitute Hosam Ghali blasted wide what could well have killed off the visitors.”

According the team's spokesman, Strikers Bright Ejike and Harrison Egbune failed to impress after they were picked to start ahead of two-goal hero Christian Pyabara and Alhaji Gero.

The Nigerian team will now move to Tunisia where it will camp ahead of the youth championship in Algeria next month.