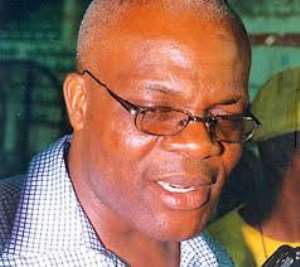 According to thisday, Not much was known of him before 1993, the year he took a bunch of young lads to the U-17 World Youth Championship and returned with the trophy. Since then Fanny AMUN has become a household name in Nigerian football. He spoke with Kunle Adewale on a number of issues

For Amun, our victory at the recent Africa Cup of Nations in South Africa has raised a number of questions. 'Why wait for 19 years to win a Nations Cup? What were we waiting for before now? What has caused it? Have we arrived? When the team was put together a few months ago we were made to believe it was a team that will inculcate a lot of home-based players for a rebuilding process and that was the position of the Nigeria Football Federation, the ministry, the government and the fans. Therefore it was a success,' Amu said.

'But then the priority should be on how the country is going to qualify for the 2014 World Cup in Brazil. The Nations Cup was just a stepping stone towards achieving that goal. That we won the AFCON was just a bonus, my position is that we should unveil players that will take us to the next level in the qualifications towards Brazil. After the Nations Cup victory we should be thinking how to surpass our second round feat at the 1994 and 1998 World Cups.

That should be the challenges before us now,' Amun said.

The football administrator is however of the opinion that Keshi cannot claim the victory in South Africa alone.

'Every Nigerian is part and parcel of the victory. People died in the process, some people sacrificed their health in the process, but one person can only be in charge. When I won the U-17 WYC in 1933 I did not lay claim to the glory alone because I just happened to be the chief coach. The government brought money, the association was there to give their backing administratively and the fans were there. It was a division of labour. If you should ask Keshi now what were the lapses he encountered he cannot remember again. So the victory belongs to everybody – not him alone. He gained the benefits in cash, while other contributors gained it in self satisfaction,' he noted.

Contrary to the notion that Keshi should stick with the relatively young players that won the country the Nations Cup trophy and do away with established players like Osaze Odemwingie, Obafemi Martins and the likes that were not part of the South Africa party, Amun is of the opinion that it should be reconciliation time.

'Reconciliation time is now. There are no antecedents of these players that Keshi and others have never had in the past. They are not worse than Keshi and Samson Siasia, and the records are there. I have their records. The Nations Cup is gone and past, so this is the time for reconciliation.

In this job the same people that you scorn today, you might come back to need them in future. Though Keshi might say if he had featured them he might not have won the Nations Cup, but now that he has won it is time to reconcile with them because there are still many competitions ahead of the team. He still needs those players. He should open his tent wide and still go through the process he used in winning the AFCON. If Keshi had told anyone that he knew he was going to win the competition he is lying. Now, he is saying nobody believed in him. Did he believe in himself? Let him open his tent now to everybody again,' he said.

Amun disagreed that Nigerian football had been on the wane prior to winning the Nations Cup. This is despite the fact the country failed to qualify for the last edition of the competition jointly hosted by Gabon and Equatorial Guinea and even failed to book a place in the football event of the last Olympic Games in London.

To Amun, the country's football was just going through a process. 'I challenge the notion that our football fortune had dwindled. It just went through a process which is not something new. Must we qualify for every competition? We have 59 African nations registered with CAF and every one of them is struggling for a ticket. Cape Verde just took African football by surprise and more surprises are still coming. We are all living witnesses to Togo's qualification for the World Cup at the expense of established African countries. That a coach won the Nations Cup and even the World Cup does not really matter, because another coach that has better knowledge and understanding of the game might not win any trophy. Like I said, the Nations Cup is gone; let us look ahead. Even the Confederations Cup in Brazil is still a test case. Keshi should talk less and let his work do the talking. I can talk now because I'm no longer there. And when I talk it speaks volumes. I was a coach, an administrator, secretary general of NFA and also head of the technical department for so long. I once had the same feelings like Keshi when I never knew about administration, but if you make him an administrator tomorrow he will see what others are going through,' he said.

He also faulted the notion that the absence of a Nigerian on the CAF and FIFA is taking a toll on the country's football, saying it is not compulsory that we must have a representative in CAF and FIFA executive committees.

Nigeria and some African countries have a less-than-flattering reputation with regard to fielding eligible players in age grade competitions, but Amun insists that is a wrong notion. He would rather see the problem as discrepancies – not cheats.

The coach and publisher explained that Nigeria's football has not got to the level it ought to be in the last 20 years due to failure to build on existing foundation.

'We don't follow the template left by the predecessors. Even with Keshi's victory at the Nations Cup, if you bring another coach today he will still drop most of the players on the pretext that they don't suit his style of play,' the U-17 winning coach said.

On the controversial issue of tickets issued ahead of the quarter final game against Cote d'Ivoire, which the NFF said was part of CAF regulations to prepare tickets for the two teams as none of them was expected to stay in the hotel beyond 24 hours after the game. According to Amun, there is nothing wrong in NFF confirming tickets.

'Tickets are confirmed even before quarter and semi final matches. It's a process and they do not need to write you. So if the NFF had gone to confirm it they had done well.'