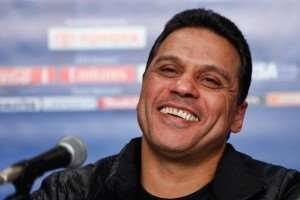 He is a happy coach who appeared at a press conference after the victory of Al Ahly on Saturday against Dolisie AC Leopards (2-1) in the CAF Super Cup. Hossam Al Badry especially thanks all the scorers of the day.

“I am very happy to win the Super cup after the Champions League. I would like to say thank you especially to players and especially to Rami Rabia and Mohammed Barakat “.

“What happens is incredible. We faced last year with enormous difficulties and yet this did not prevent us from winning seventh champions of Africa and now fifth Super Cup success. This means the importance of this new crown. It can only encourage us to work harder to keep ourselves at the top. I said that this year we were very ambitious with two national titles at stake, and Championship Cup and the Champions League. We conducted a quarter of our projects against a very good Congolese team that is superior to many teams we faced last season. All the credit goes to the players I want to congratulate. “