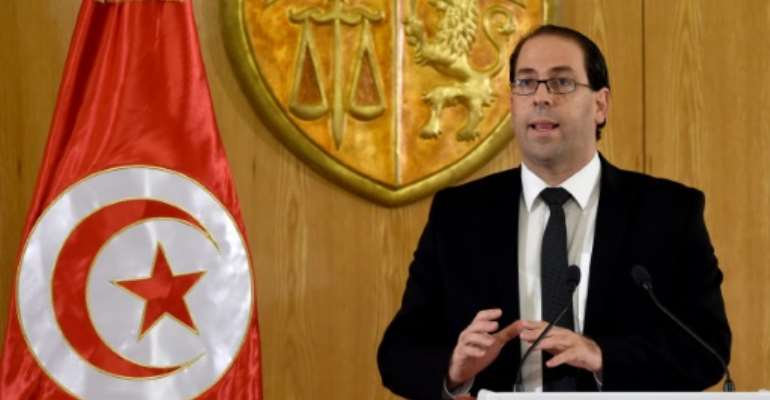 Tunisian Prime Minister Youssef Chahed, seen in August 2016, said the transition to democracy was costly for his country, which relies on France for help "at this critical moment". By Fethi Belaid (AFP)

Tunis (AFP) - Tunisian Prime Minister Youssef Chahed heads to Paris on Wednesday in a bid to drum up French investment in the struggling economy of its former North African colony.

Chahed, 41, will meet his counterpart Manuel Valls and President Francois Hollande during the "strategic" visit, he told AFP in an interview on Tuesday.

"Five years after the revolution, we have succeeded in the democratic transition... (but) today we face an important economic challenge to consolidate the Tunisian democratic experience," Chahed said.

"We obviously rely on France to help Tunisia at this critical moment."

Chahed took over as prime minister in August after lawmakers passed a vote of no confidence in the previous government following just 18 months in office.

"The democratic transition was enormously costly to Tunisia," Chahed said, adding that his country "today needs huge aid at the economic level".

The years since the 2011 uprising have seen Tunisia hit by a string of jihadist-claimed attacks, including assaults last year on its vital tourism sector which killed dozens of foreign visitors.

Tunisia's economy grew just 1.2 percent in the first half of 2016, according to official figures, with unemployment at 15 percent.

The country's efforts to rebound from unrest have also been undermined by chaos in neighbouring Libya, according to Chahed.

"All of this has a cost and I think our partner France must assume... the cost when it comes to Tunisia," the premier said.

While acknowledging that France was making "important efforts" to help, Chahed said that French military aid could be "far higher" than the 20-million-euro security plan the two countries agreed in October 2015.

"Tunisia needs direct foreign investment and (Wednesday's visit) will be an occasion to restart the investment machine to create jobs," he said.

"We are trying to create a favourable climate for French investments in Tunisia... we're trying to get a return of French tourists," Chahed added.