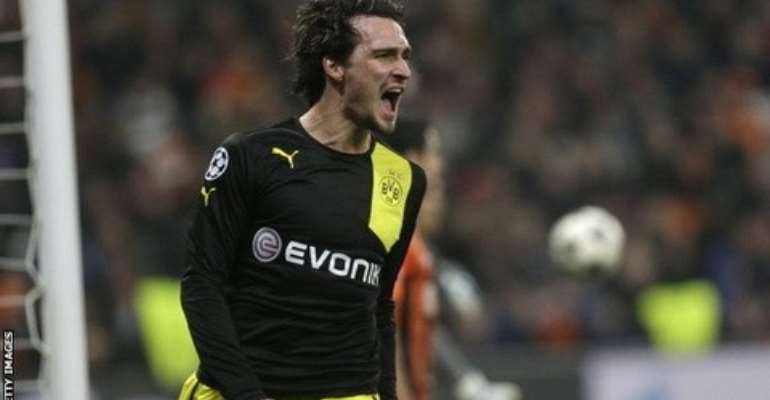 Mats Hummels' header earned Borussia Dortmund a draw with two away goals in the first leg of their Champions League last-16 tie against Shakhtar Donetsk.

The Ukrainians led twice, first through Darijo Srna's fierce free-kick and then Douglas Costa's neat control and finish, but could not earn the win.

Striker Robert Lewandowski capitalised from Mario Goetze's cross to peg Shakhtar back just before the break.

And Hummels stooped to level as Shakhtar's defence dozed late on.

The Germans just about earned parity in the tie and will be favourites to progress in a competition that has become their priority - as the domestic title that they have held for two years appears to be slipping away to runaway leaders Bayern Munich.

The mid-season break meant that their opponents had not played a competitive match since their final Champions League group game against Juventus on 5 December, but it was Shakhtar who were into their stride first.

Srna, who had escaped censure for levering Lewandowski off the ball in the penalty area at the opposite end, heaped punishment on Felipe Santana for his rash barge on Luiz Adriano 30 yards from goal.

The visitors were staggered and Marcel Schmelzer was forced into a hurried headed clearance as a clutch of Shakhtar attackers surged forward in search of a swift second.

The Germans held firm, though, and Lewandowski capitalised when he worked his way into a pocket of space in the penalty area and finished coolly after his air kick deceived Dmytro Chygrynskiy and Fernandinho.

Taison, signed in January for an estimated £12m from Metalist Kharkiv to replace the Anzhi Makhachkala-bound Willian, had ruffled the Dortmund defence by running at them.

With the visitors apparently content to draw the sting out of the game with long periods of possession after the break, it was a surprise when his competitive debut was brought to an early end on the hour.

His replacement Douglas Costa, however, took up from where his fellow Brazilian left off.

A long punt upfield from Tomas Hubschman should have posed no problems but once Hummels got caught underneath it and Schmelzer backed off, Costa produced two exquisite touches - first killing the dropping ball, the second sweeping home - to convert.

Lewandowski and Goetze looked the most likely combination to unlock the Shakhtar rearguard once more, with the Polish striker burying a volley in the advertising hoardings rather than the net from his German team-mate's cross.

But with Dortmund looking to be out of ideas, the hosts' concentration slipped.

Hummels, who had hit the bar with a header in the first half, did not have to leave the ground to direct a corner past a rooted Andriy Pyatov and swing the tie, perhaps decisively, his side's way.