Ghana miss out on bronze 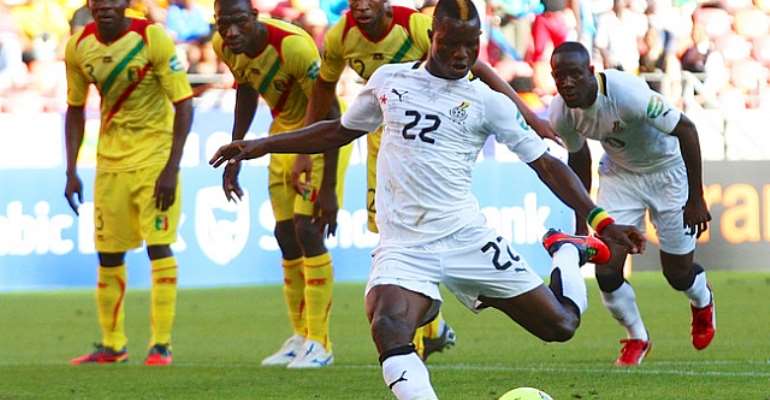 Port Elizabeth, Feb. 9, GNA - Ghana quest of retiring from the 2013 Africa Cup of Nations with pride ended empty after the Black Stars were beaten 1-3 by Mali in their play-off at the Nelson Mandela Bay Stadium in Port Elizabeth.

Ghana, looking to revenge a 2-0 defeat to Mali at the same stage a year ago in Gabon and Equatorial Guinea struggled to shake off their disappointment with playing for bronze instead of the gold they craved before the competition.

Richard Kissi Boateng raced clear in two minutes and managed to send an in-swing, but waiting Asamoah Gyan and Solomon Asante could not trap before it moved to debutant, Awal Mohammed. Before the centre half could attempt a shot, he was dispossessed.

Ghana recovered with Wakaso sent clear at the far right. In control of possession, the Espayol midfielder attempted to pick out Gyan who failed to reach it gifting the Eagles the opportunity to attack. Mamadou Samassa controlled well and unleashed a shot that earned goalkeeper Fatua Dauda his first test of the evening.

Mali sprint ahead in the 21st minutes through Samassa after he got to the end of a cross to head home with diving Dauda well beaten.

Kwadwo Asamoah twice had a glorious moment to pull parity for Ghana but the Juventus midfielder side-netted one and sent one across the face of goal to no one in particular.

Seydou Keita doubled Mali's advantage right from the recess after the victors turned defence into attack. The former Barcelona player kept a cool head to slot home from a close range to deflate Ghana's quest.

Ghana earned a penalty in 59minutes after Afful's cross was adjudged  to have been handled in the box. Wakaso who has scored three times from the spot in five games elected himself to convert, only to miss badly to keep the Malian lead intact.

Asamoah's long ranger pulled a goal back for Ghana with seven minutes to end proceedings and soon, the goal began to motivate the Black Stars to push for an equaliser.

While Ghana probed, Mali sat back and attacked on the counter. Their efforts were rewarded two minutes into the added-on time when substitute Dairra Sigamary put the game beyond Ghana by slamming in Mali's third goal to nail the Stars defeat.