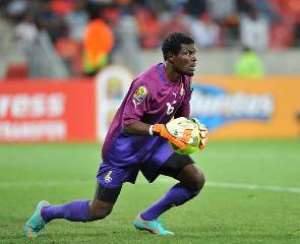 He said the goalkeeper had demonstrated sheer bravery and good technical abilities which were unusual of local players in the Stars' matches played so far and urged him to remain focused.

'In my view, Fatau could soon be commanding a permanent place as our number one choice goalkeeper in spite of competition  from his colleagues if he keeps the momentum', he noted.

Fatau, a goalkeeper of Obuasi-based Ashgold FC, had earned the respect of supporters and football analysts for being instrumental in the Stars' qualification to the semi-final of the tournament.

Speaking to the GNA Sports on Tuesday in Kumasi, De-Graft, 76, and a member of the Stars' team that won Ghana's first AFCON in 1963, was upbeat about his career and likened him to some great goalkeepers on the African continent.

Commenting on the general performance of the other countries, he expressed shock at the exit of pre-tournament favourites, Cote D' Ivoire, who were eliminated by Nigeria in the quarter-final.

The Ivorians, boasting of some great players, had since 2006 been touted as pre-tournament favourites in the AFCON but disappointed.

De-Graft said the African game had seen a steady growth over the years due to massive investment and called on stakeholders to continue to give football the necessary attention.

The former Stars' goalkeeper cautioned the Stars not underestimate Burkina Faso as they clash in the semi-final, saying they should go all out and beat their West African neighbours.