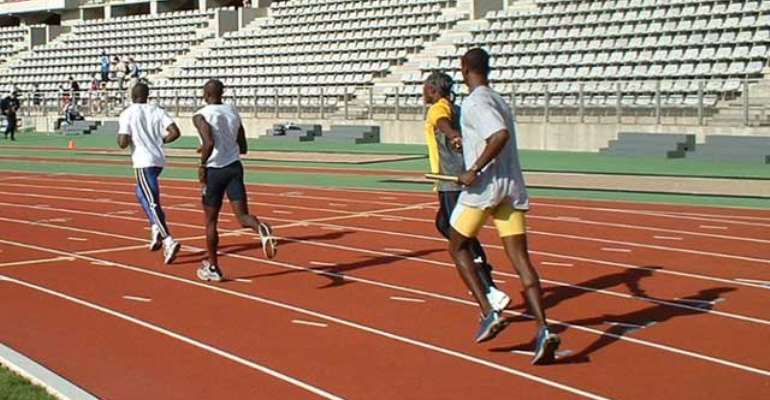 ....Simpson Close To Gold Abuja, Nigeria, Oct 13 - GNA - The latest round in the continent's battle for sprinting supremacy went to Ghana as their quartet scorched to victory in the men's 4x100m relay, despite the efforts of the Nigerian squad featuring newly crowned 100m champion Deji Aliu. Ghana won a gold when her quartet ran a blistering race to beat favourites, Nigeria to second place. In winning the gold, the Ghanaian quartet made a time of 38.63 seconds, their personal best at the event and were followed by Nigeria's 38.70 to win the silver and Senegal which returned 39.79 seconds to win the bronze. The back benchers were Cameroun who made it in 39.94 seconds, followed by South Africa, 40.06 seconds, Liberia, 40.49 seconds and Sierra Leone in 40.87 seconds. Christian Nsiah who started the race in lane five, nearly caught up with the competitors in lanes six and seven before passing the baton over to Aziz Zakari who maintained the pace and shot Ghana into the lead. Eric Nkansah consolidated Ghana's lead with a great run before handing over the baton to Leonard Myles-Mills who had the Games 100 metres champion, Deji Aliu to contend with. Deji offered a great challenge and appeared to be out running Myles-Mills with about 10 metres to go before the former African champion run harder to finish ahead of the Nigerian. The Ghanaian's victory silenced the vociferous Nigerian fans who had tipped their team to pick the 4x100 meters men's relay gold. Meanwhile, Ghana is close to another gold medal in the women's heptalon event where Margaret Simpson is in a comfortable lead after four out of the seven events. Simpson won the 100 metres, the high jump and the 200 metres, while she placed third in the shot put. She leads the pool with 3626 points, followed by J.G. Robbwerson of South Africa who is on 3481 and P. Okoro of Nigeria is third with 3416. Others competing with Simpson are S. Bouaoudi of Algeria, C. Laporte of Seychelles, O. Eleche of Nigeria, H. Dhoubi of Tunisia and I. Domaingus of Mauritius. The remaining three events, long jump, 800 metres and javelin throw will be decided on Tuesday.