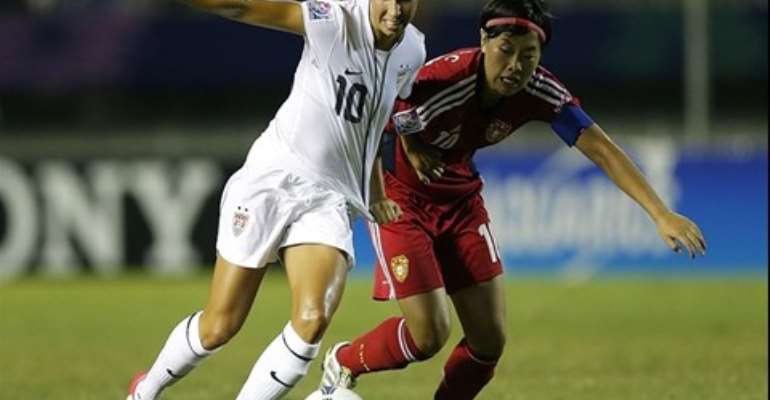 USA have spurned the opportunity to advance to the knockout stage with a match to spare, after the two-times champions were held 1-1 by China PR in Hiroshima.

The result means Germany, on six points, become the first team to be assured of progressing, while USA must avoid defeat in their final outing against the Europeans to be guaranteed of advancing.

The two teams exchanged first-half goals with Shen Lili giving China, on the back of a hefty 4-0 defeat by Germany, a surprise lead on 19 minutes. Lili crashed home a shot from 15 metres to give goalkeeper Bryane Heaberlin no chance.

The Stars and Stripes drew level nine minutes before the interval through Maya Hayes, who came into the match high on confidence after her opening day hat-trick. Kealia Ohai burst into the penalty area from the right to tee up Hayes for her fourth goal in this tournament.

Chances were few and far between during the opening half, despite an early foray for USA as captain Julie Johnston forced Shen Li into a great save.

USA had the better of a relatively tame second half despite the best efforts of both teams, with play invariably bogged down in the midfield.

Despite more than 60 per cent possession, the closest the USA came to securing a decisive second goal was a Johnston corner which struck the post direct off a corner.

2020 Election Petition was about EC Chair’s declaration; not...
21 minutes ago