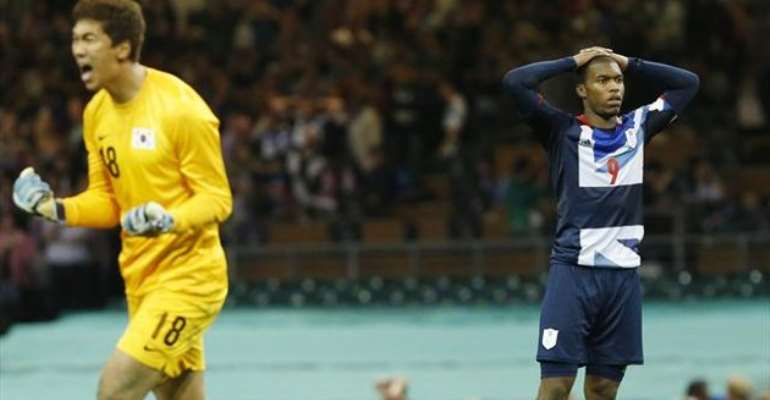 South Korea this evening fought gallantly to beat team GB men's soccer team to the semi-finals of the Olympic football tournament. The British national soccer teams have over the years been pushed into the doldrums due to lack of spirit and hunger for laurels.

The game was fiercely contested by both sides, with team GB having the biting edge upfront early in the first half with the South Koreans adapting a defensive system. Like most Asian teams they are highly tactical and disciplined. The Korean's sat deep in defence and occasionally attacked when necessary and conducive.

The hard work of the Korean's was rewarded when Ji Dong –Won blasted them into the lead in the 29th minute of the first half. Their joy was short lived when Aaron Ramsey converted a penalty to draw team GB on level terms. Aaron Ramsey failed to put team GB in the lead a few minutes after when he failed to convert a second penalty after Daniel Sturridge was brought down in the 18 yard box.

The game went into extra time, then to a penalty shoot-out where Sturridge handed the Korean's the keys to the semi-final after he lost the fifth kick. Gold medal favourite Brazil came from behind to beat a strong Honduras side 3-2 to sail to the semi-final.

Senegal and Mexico thrilled 82,000 fans at Wembley with pure and total football. Senegal came from behind to cancel a two-nil deficit in regulation time, before two defensive blunders in extra time put Mexico 4-2 ahead. Japan also walloped Egypt 3-0 to book their place in the semi-final. What a fantastic day of football!