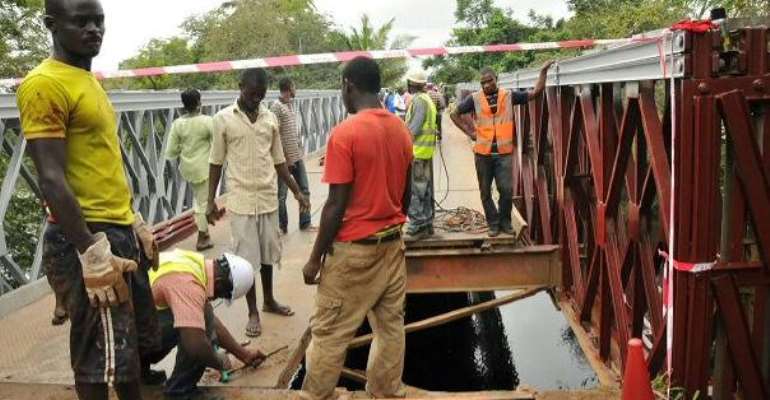 The attempt to derail the “Tour to restore hope” campaign of the 2012 Presidential Candidate of the New Patriotic Party by the Mills-Mahama led National Democratic Congress government has backfired.

The visit of the 2012 Presidential Candidate of the New Patriotic Party to patients at the St Martin de Porres Hospital in Ekwe in the Jomoro constituency took an interesting twist when the only bridge linking the hospital was ordered to be pulled down “to be reconstructed”.

Nana Akufo-Addo, Monday, was due to visit patients at the hospital and also to ascertain the state of the National Health Insurance Scheme at the hospital.

According to Herbert Krapa, press secretary to the NPP flagbearer, the campaign entourage used that same bridge the previous day only to realize Monday morning that the bridge was under reconstruction rendering the bridge unusable by vehicles.

“Residents tell us that even this morning some vehicles had used the bridge before we got there,” Herbert added.

The NPP flagbearer had to abandon his vehicle and walked over the bridge and entered Ekwe in order to be able to visit the hospital.

“Nana Akufo-Addo will stop at nothing, to take his message of hope and prosperity to the people,” Herbert said.

On reaching Ekwe and the St Martin de Porres Hospital, Nana Addo apologised to the residents and patients for the inconvenience that the broken bridge will cause them.

He said there's suspicion that the bridge had been pulled down because of his visit to the constituency, adding that "if it is so, although unfortunate, the inconvenience won't be for long".

“Nana Akufo-Addo was particularly worried about the inconvenience that pregnant women and other people on their way to go and receive medical attention would face because of the bridge that has been pulled down,” Mr Krapa said.

As for Nana Addo, even if they remove the bridge itself, he will swim his way to go and meet the people with his message, Herbert added.

Similarly, another bridge that connects Nkroful to Esiama in the Jomoro constituency was closed to vehicular movement upon the arrival of Nana Akufo-Addo on Sunday.

Nana Akufo-Addo and his entourage once again had to cross over by foot to Esiama. A huge crowd waited for Nana Akufo-Addo as he crossed over the “bridge under construction”. The excited crowd were seen waving red cards, which they explained was for President Mills and his government.

Addressing a charged and massive crowd at Esiama, after he has crossed over, Nana Addo said, “the NDC's better agenda has drowned in deep waters and that is why they have resorted to these frustrated and cheap tactics.”

Yankey, 45, said they are showing the red card to go and stay in the drtessing room “so the NPP can bring us back to prosperity.”

He is confident that the Ghanaian people have seen for themselves what both the NPP and NDC can do and will make the right decision come December 7.