New gunfire near Madagascar military base 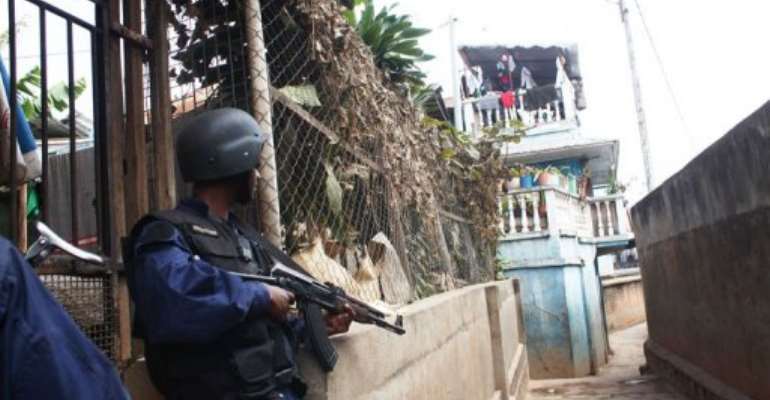 Gunfire erupted at a military base near Antananarivo international airport at 6:00 am local time. By ANDREEA CAMPEANU (AFP)

ANTANANARIVO (AFP) - New gunfire was heard Sunday from the direction of a military base near Madagascar's main airport after the defence minister asserted that a mutiny had been brought under control.

Gunfire erupted at the Ivatu air and naval base near Antananarivo international airport at 6:00 am (0300 GMT) and abated after four hours but then resumed intermittently, scaring off dozens of curious onlookers, an AFP journalist said.

"This morning there was indeed a mutiny led by certain elements. The chief of staff has things in hand," Defence Minister Andre Lucien Rakotoarimasy told AFP.

"It's going on, we don't know anything about their demands for the moment," he added, refusing to specify the number of mutineers.

The leader of the renegade troops was identified as Koto Mainty, or the "Black Corporal", a former member of the mutinous regiment said, adding that several young recruits had joined him.

The mutiny comes ahead of a meeting Wednesday of the Indian Ocean island nation's rival leaders to try to resolve a political crisis that has dragged on since an army-backed coup in 2009 which toppled then president Marc Ravalomanana.

A diplomatic source said the mutiny could be an attempt to derail the landmark face-to-face meeting to be held in the Seychelles.

The Ivatu base was the scene of a mutiny in November 2010 and an attempted coup against current President Andry Rajoelina, who had ousted Ravalomanana.

The failed putsch came as the country prepared to vote in a referendum for a new constitution that would allow Rajoelina, a former disc jockey and once Antananarivo's mayor, to extend his term as head of state.

He has so far failed to steer the country back to democracy.

Soldiers have repeatedly meddled in politics in Madagascar, which gained independence from France in 1960.

Rajoelina and Ravalomanana, who is living in exile in South Africa, signed a roadmap in September 2011 meant to guide Madagascar to new elections, but the deal still has not been fully implemented.

A timeframe for legislative and presidential elections is to be announced later this month.

The 15-nation Southern African Development Community has given the rival leaders a July 31 deadline to reach an agreement.

In 2010, Ravalomanana was sentenced in absentia for the murders of around 30 demonstrators killed by his presidential guard in 2009 in protests that led to his overthrow.

Ravalomanana was served with a summons last week over a $23 million lawsuit filed by victims of the February 2009 unrest that led to his overthrow and is expected to appear in a South African court on August 1.

Ravalomanana has twice tried to return to Madagascar, but officials there have both times prevented him and his wife from entering the country.