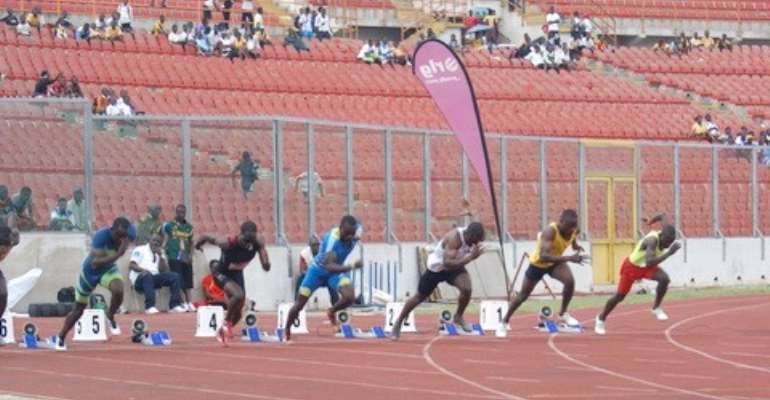 Government has predicted an overwhelming overhaul of the country's sporting facilities and infrastructure from early next year.

Deputy Minister for Youth and Sports, Dr. Edward Omane Boamah who made the announcement said government is also considering several partnerships with the private sector for the development of sports itself and for sporting facilities across the country.

The Deputy Minister was speaking at the opening of the 2nd rlg Ghana grand prix at the Baba Yara Stadium in Kumasi over the weekend.

The Grand Prix is an International track and field athlete and attracted over 35 foreign athletes and 60 locally based Ghanaian athletes in a four-hour international athletics competition at the Baba Yara Stadium.

Ghana's foreign-based athletes, many of who were in Benin for the African championships also competed in Friday's meet.

The event also served as warm up for athletes ahead of the London 2012 Olympics.

The 2012 rlg Ghana Grand Prix took place under the distinguished patronage of President John Evans Atta Mills, and is part of the Ghana Athletics Association's efforts towards revitalizing athletics in Ghana, and encouraging the young ones to take an interest in the sport.

The Deputy Minister cited the massive sponsorship offered by private indigenous mobile phones and computer assembling firm, rlg which ensured a huge success of the last year's grand prix and that of this year in addition to the ejection of funds towards the Ghana's hosting of ECOWAS games last month as well as the refurbishment of the rlg/Hithramani Sports Complex at the Accra Sports Stadium.

He asked corporate Ghana to emulate the rlg example of giving back to society and supporting central government's developmental agenda.

The Board Chairman of the National Sports Authority, Kojo Bonsu said his outfit was doing everything possible to ensure the growth and development of lesser-known sporting disciplines with focus on unearthing young talents at the school levels.

The chief executive of Kumasi metropolitan assembly, Samuel Sarpong said the hosting of the international event has enhanced the image of athletics and sports in general in the region and commended rlg communications for “laudable efforts”.

The Chief Operating Officer of rlg Communications, David Afugani renewed the commitment of the company towards sports development in Ghana.

“These supports are part of a bigger dream to ensure skills and talents are built among our youth”, he said.

The event was organised by the Ghana Athletes Association and Event PR, an event management company.