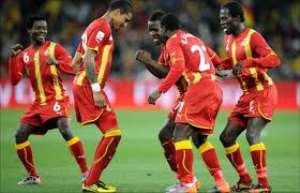 Accra, July 5, GNA – Ghana's Black Stars will face Malawi in the final round of the qualifying rounds of the 2013 Africa Cup of Nations.

The winner after the two-leg matches qualifies for the final tournament to be played in South Africa next year.

Ghana placed fourth at the 2012 edition of the Nations Cup held jointly in Gabon and Equatorial Guinea.

Information gathered by GNA Sports at the draw indicates that the Nations Cup, which is held in even-number years since the 1968 finals in Ethiopia, switches to uneven-number years from 2013 to avoid every second tournament being held early in the same year as a World Cup.

In other encounters, Zambia launch their title defence with a home tie against Uganda, Nigeria comes up against Liberia, Central Africa Republic, shock qualifiers for the round-of-30 draw at the expense of Egypt, were paired with Burkina Faso and are making a first appearance at the tournament.

Ethiopia, another country to upset the odds by ousting Benin, face Sudan in a spicy East African derby with another intriguing regional showdown that pits Libya against Algeria in an all North Africa affair.

A notable omission from the 30 countries involved in the draw were record seven-time champions Egypt, who surprisingly fell to Central Africa Republic during the first qualifying round last month.

The Pharaohs, winners of an unrivalled three consecutive titles between 2006 and 2010, will miss consecutive Cup of Nations tournaments for only the second time since the African football showcase was launched 55 years ago.