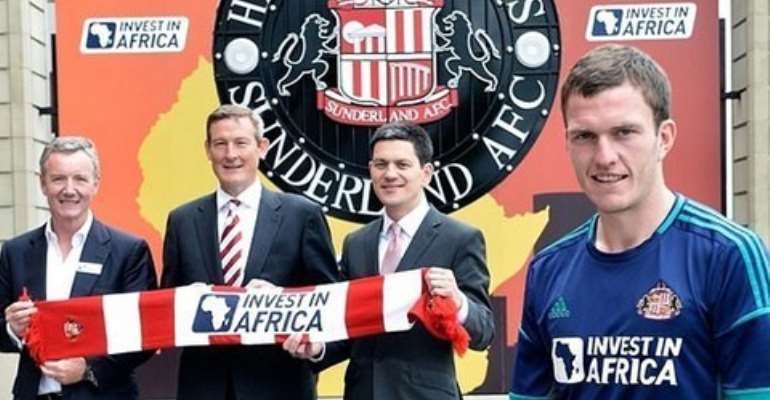 The Black Cats will wear the name of the organisation on their shirts for at least the next two seasons.

The Black Cats will wear the name of the organisation on their shirts for at least the next two seasons.

Invest in Africa is a partnership of companies formed to promote African business opportunities.

Sunderland have existing African ties, with a number of the continent's players in their ranks in recent years.

The club also signed a partnership agreement with Ghanaian side Asante Kotoko last year, which saw them offer practical support and advice in youth coaching to the Kumasi-based club.

"We are very proud to have augmented our relationship with Invest in Africa through this wonderful agreement," Sunderland chairman Ellis Short said.

"It truly gives something back to both our own region and to a continent which has become a firm part of our club's success story over recent seasons."

Sunderland chief executive Margaret Byrne added: "Africa has a wonderful passion for the game, something which is mirrored here in our own North East region.

"Both places are renowned for examples of how football can engage people and organisations to the extent where it changes lives."

Invest in Africa has been launched by Tullow Oil, which has discovered several oilfields on the continent in recent years.

"How do you change the perception of Africa away from aid?" Tullow's head Aidan Heavey told the BBC's Focus on Africa programme.

"Africa is one of the best investment destinations on the planet right now."

This echoes comments made earlier this month by Hillary Clinton, who said that Africa was the "land of opportunity".

"I want all of my fellow American citizens, particularly our business community, to hear this: Africa offers the highest rate of return on foreign direct investment of any developing region in the world," AFP news agency quotes her as saying.