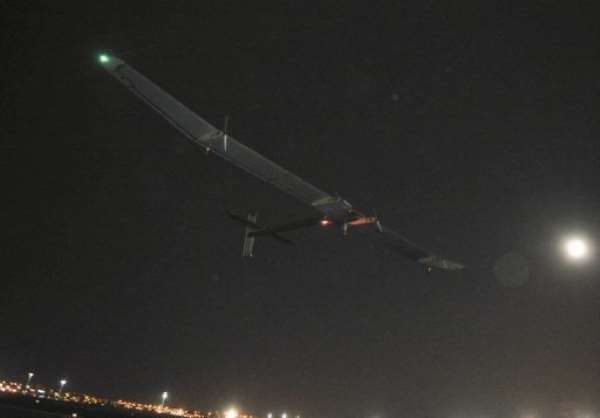 RABAT (AFP) - The team behind the Solar Impulse, the solar-powered aircraft that was forced to turn back during a desert flight in Morocco, said Thursday they were working on a new date to renew the bid.

Andre Borschberg, the pilot of the Swiss-made prototype plane, which flies without a drop of fuel, was resting after a 16-hour bid to fly from the Moroccan capital Rabat to the southern town of Ouarzazate, his colleagues said.

"We'll know more in the next few days," announced the press service of the Solar Impulse team, which has launched the plane on its first inter-continental trip ahead of a planned bid to fly round the world in 2014.

Ceremonies planned in Ouarzazate, an arid part of the north African country, where the winner of an international tender to build a solar power station was due to be announced, have been postponed, the Moroccan Agency for Solar Energy (Masen) said.

During Wednesday's attempt to fly to Ouarzazate, "nature was more powerful than we were", Borschberg told the MAP news agency, referring to the strong winds and turbulence that forced him to turn round and fly back to Rabat.

The trip was "difficult and exciting" because of the hot, arid terrain and his proximity to the Atlas mountains, he said.

"The flight was interesting and rich in information. We learned a lot from this mission," Borschberg added, while expressing disappointment that he had been unable to complete the flight first time round.

"This situation is a perfect reminder of how challenging and difficult the Solar Impulse missions are and how flexible and prepared the entire team and the host country must be," the team said on their website http://solarimpulse.com.

"Thanks to the professionalism of both Masen and Strat'Events, the local event management company, the logistics support for the unexpected chain of events were managed efficiently and effectively."

Ouarzazate is the final goal in a flight that began in Payerne in Switerland on May 24, when Solar Impulse set out for Madrid, the first stage of the planned trip to cross the Mediterranean and fly from Europe to Africa.

The giant high-tech aircraft, which has the wingspan of a jumbo jet but weighs no more than a medium-sized car, is fitted with 12,000 solar cells feeding four electric motors driving propellors.

Solar Impulse landed overnight at Rabat airport, after turning back because of unexpected winds, according to the team.

"We are studying the weather conditions to look for a new attempt to reach Ouarzazate or for another solution", Alexandra Gindroz of the Solar Impulse press service told AFP.