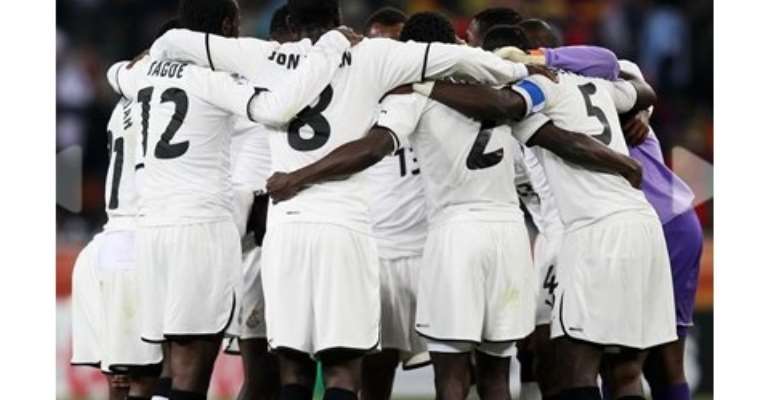 A late spirited performance from the Black Stars could not prevent Kwasi Appiah from been handed his first defeat in charge of the Black Stars against African champions, Zambia in Ndola.

The lone goal scored by Christopher Katongo in the 15th minute was all that was needed by the Chipolopolos to secure an historic win over the Black Stars in the 2014 World Cup qualifier that was played at the newly constructed Lewy Mwawanasa Stadium.

Largely, it was a disappointing performance from a Black Stars side that last week beat Lesotho by seven goals to nothing. The Chipolopolos started on a very bright note making their intentions known with early incursions into the half of the Stars.

Zambian legend, Christopher who lifted the Africa Nations Cup in Libreville, Gabon this year was the hero for his side once again as he left powered shot took a ricochet off a Ghanaian defender beating which left Adam Kwarasey totally bemused.

The Zambians could have made it two if Mayuka had been more clinical with some of the chances that fell his way. The Chipolopolos were at their very best as they were sharp in attack and their defense were on point throughout the game.

On the day, Kwasi Appiah's selection was lacking substance. The first half the Black Stars midfield that hinged on Derek Boateng, Kwadwo Asamoah, Agyemang Badu and Sulley Muntari were totally dominated and outplayed.

The Stars striking pair of Jordan Ayew and Dominic Adiyiah who scored four goals between them against Lesotho could not even manage one as their supply was totally shut down by a Zambian defence marshalled by Himonde and Mbola who did excellently well on the day.

The Zambians went into the interval as the stronger and more determined side. After the break, the pep talk from Coach Kwasi Appiah seemed to be working as his charges started breaking the dominance of their hosts. At this point the game became delicately balanced yet the Black Stars were not able to create any clear cut opportunity.

When things became difficult for the Black Stars, Christian Atsu was brought on for Kwadwo Asamoah in the 53rd minute in a bid to add bite to the attack. The change, however, brought nothing.

In the last quarter when Muntari came off for Richard Mpong, the Stars gained the bigger share of possession and the pressure was piled on the African champions in a desperate attempt to score an equalizer.

Officiating by referee Med Kordi was particularly questionable when in the 88th minute a shot from Christian Atsu was handled by Shinzo in the penalty box and no foul was given. That did not stop there, in the added time Atsu who was visibly brought down at the edge of the penalty box had the infringement going against him.

At that moment it was clear that Ghana had lost the game to a determined and deserved side.

The loss throws the group wide opened as Ghana must do well to win all remaining matches to stand in the chance of playing in the 2014 World Cup in Brazil.