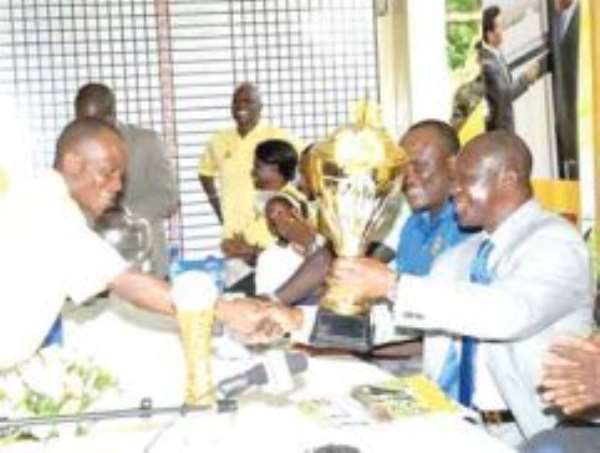 Yaw Dogbe and Jessica Bearls Tei both of the Achimota Golf Club won the ultimate prizes in the scratch event of the 55th edition of the prestigious Asantehene Gold Cup invitational Gold tournament, held at the Royal Golf Club in Kumasi.

The two day-event, which ended last Sunday, saw Dogbe winning the men’s scratch with a score of 154 to beat Kofi Yeboah (score 146) and S. Atiobge (score 148) both of Tafo to second and third places respectively.

In the women’s event, Jessica won with the score of 180 to beat Grace Afriyie of Tema and Felicity Okyei Gyeabour of Royal Golf Club to the second and third places.

Both winners had the honour of being presented with fantastic prizes by the Asantehene Otumfuo Osei Tutu II.

Winners in some of the other categories included E. Nyarko in the youth category, S.K. Arthur in the ladies handicap and Kwame Korsah in the amateur juniors.

The tournament, the biggest on the nation’s golfing calender, which had communications giants MTN as the headline sponsor, and other sponsors including Johnnie Walker and Cal Bank, attracted about 300 golfers from all over the country.

First played in honour of the late then Asantehene, Otumfuo Sir Osei Agyeman Prempeh II in 1955, the Asantehene Gold Cup was in the early years dominated by expatriates who constituted the chunk of the membership of the golfing clubs in the country.

It was not until 1963 that a Ghanaian, S.K. Appiah broke the expatriate dominance and since then Ghanaians had dominated the tournament.

Speaking at the closing ceremony, Otumfuo Osei Tutu described golf as a very important sport that must be embraced by all.

He was happy that the winners were from outside Kumasi saying it would help kill the notion that scores at the Asantehene Gold Cup tournament were manipulated in favour of Kumasi golfers.

The Asantehene noted that golf is a game of integrity and fairness and all should live by that.