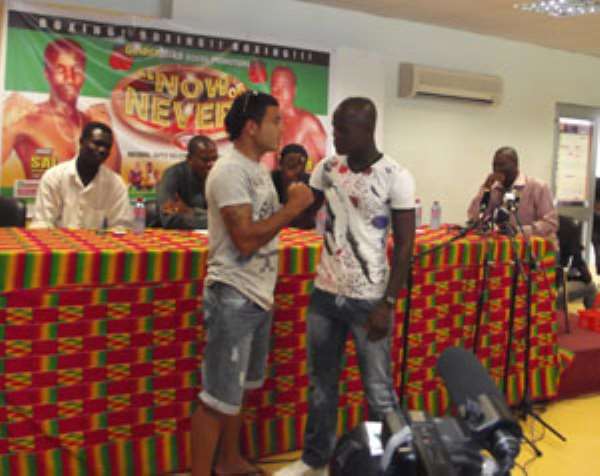 Golden Mike Boxing Promotions will tonight light up the El Wak Stadium with a series of attractive bouts for boxing fans.

The event, dubbed 'Now of Never, will have six bouts, with boxers from Uruguay and Paraguay also participating.

Announcing the bouts at a press conference in Accra on Thursday, May 24, Mike Tetteh, Chief Executive officer of Golden Mike Promotions, said his outfit was committed to the development of boxers and boxing in the country, hence their determination to organize the event despite challenges.

Ishmeal Aryeetey and Odalai Lamptey will compete in an eight-round Featherweight contest, with Isaac Owusu and Emmanuel Quartey completing the schedules for the night in a National Super Batamweight Championship.

Tetteh indicated that his outfit would continue to provide Ghanaians with quality bouts as they were not ready to compromise on their track record, which was recognized across the globe.

He said the night would also see hip-life artistes Buk Bak and Keche perform, adding that it was part of the plans by Golden Mike Boxing Promotions to attract boxing fans and music lovers to the venue.

Tetteh said his outfit had made adequate security arrangements at the venue for fans and assured all that their safety would be guaranteed.