I will ensure free, fair and transparent elections in 2012-President Mills 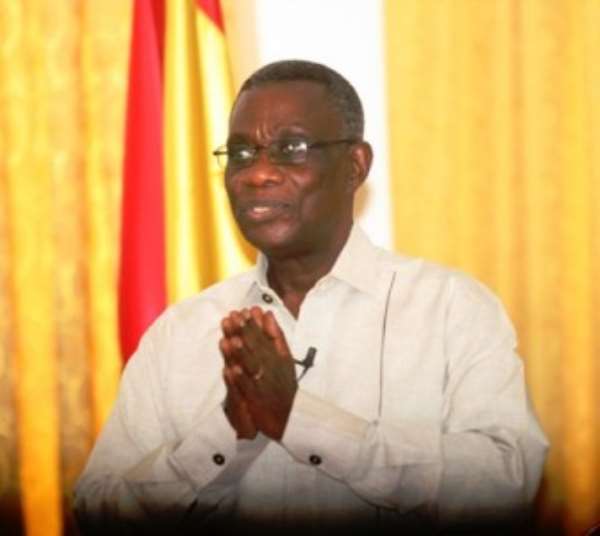 Sunyani, May 01, GNA- President John Atta Mills says he will “take all necessary constitutional steps to ensure the conduct of free, fair and transparent elections in 2012.

The laws of the land will not be a respecter of status and will be made to deal decisively with any person who will attempt to push the country into a state of anarchy”, he warned

He was addressing a mammoth crowd of workers on May Day in Sunyani under the theme, “Election 2012: the Role of Workers in Securing Peaceful and Fair Elections”

President Mills noted that the theme for the Day demonstrated Organised Labour's anxiety and willingness to contribute to a peaceful, free and fair elections, saying, it was “a source of great encouragement to me, since I am determined, with the help of God to do everything possible to make sure that it is so”.

He emphasised that it was the collective responsibility of all citizens of Ghana to ensure that the peace that the nation was enjoying was not over-turned by any event and expressed the hope that with the gains chalked on the labour front would not “sit idly by and allow the inordinate desire of certain persons to destroy our dear motherland”.

The President expressed appreciation to organised labour for its co-operation in maintaining the peace of the country through maturity and forbearance in the pursuit of the rights of working people.

Prof. Mills gave assurance that the Government would not abuse the cooperation and patience of the Ghanaian workforce but would use it to quicken the pace in the delivery of their just rewards.

The President said his administration had demonstrated its genuine concern for the protection of the interest of working people by implementing the Single Spine Pay Policy (SSPP), which had more than doubled the government's wage bill from GH¢ 2.4 billion to GH¢ 5.6 billion.

He said currently 99.23 percent of public sector workers had been successfully migrated onto the SSPP structure, adding, the Fair Wages Grievance Review Committee had been set up to hear the cases of those who had genuine grievances, whilst negotiations over 'market premium' and 'category 2 and 3' allowances continued.

The President pledged that the promotion of decent work and enhancing of social protection schemes would continue to be very high on the development agenda of his administration.

He stressed that his regime would continue to pursue a national development agenda that prioritised the realisation of citizens' rights and entitlements for the enhancement of the nation's democratic development.

Mr. Kofi Asamoah, Secretary General of the Ghana Trade Union Congress (TUC), noted that the nation's democratic dispensation had thrived and earned the country enormous international goodwill, saying the country had benefited immensely from that image and goodwill.

He stated that it was a collective and historic responsibility as a nation to protect the democratic order and the gains that had flowed from it in the last two decades, pledging that Ghanaian workers would play their roles in that pursuit.

Mr Asamoah said organised labour would continue to seek fulfillment of workers' aspirations, hopes and achievements of their objectives as labour movement through democratic processes and within the framework of a constitutional democracy and their concern for the welfare of Ghanaians, irrespective of ethnic origin, religion, age and gender.

The TUC's Secretary General expressed the conviction that it was only by deepening democracy that the aspirations of the people for quality education, access to potable water and healthcare, food security, housing, a living wage and other public goods could be assured.

He stated that globally, the Trade Union Movement was generally recognised as a bastion of democracy and of human rights because it concentrated within the collective and organised will of the working people in whose name and the welfare powers of governance were largely supposed to be exercised.

“Workers and their families form the majority of our society and their interests and well-being, which should be at the heart of the democratisation”, he added.

Mr. Asamoah gave the assurance that organised labour would remain non-partisan as the country organised itself for the presidential and parliamentary elections in December, this year.

He, however, cautioned that “because we have nowhere to run to in the event of civil strife and political violence, the leadership of TUC will not fail to organise and resist any attempt by any group or person who intended to subvert the current democratic dispensation or threaten the peace and stability enjoyed.

Mr. Asamoah called on all stakeholders including Government, political parties, electoral commission and the security agencies to ensure peaceful and fair elections in December, emphasising that politics of insults must give way to politics of issues.

Mr. Kwadwo Nyamekye-Marfo, Brong-Ahafo Regional Minister, in a welcoming address, said the choice of Sunyani to mark the occasion was not by accident because the city had of late become the magnet for national conference, congresses, seminars, workshops, meetings and conventions.

According to him, the regional capital offered a true replica of the peace Ghanaians seek as it displays “its beauty, cleanliness, well planned lay outs with well-lit streets”.

The Regional Minister indicated that Brong-Ahafo offered great potential for investment especially in the agricultural sector since “large tracts of unencumbered land” was available for prospective investors to utilize.

Mr. Nyamekye-Marfo noted that because of the government's pragmatic and good policies coupled with the relative peace in the Region, some investors particularly, in the agricultural and mining sectors, had commenced operations in the region.

He invited more investors into the region to provide jobs for the people.

The Regional Minister expressed the hope that workers would take advantage of the establishment of the University of Energy and Natural Resources which will admit its first batch of students in September/October to upgrade themselves.