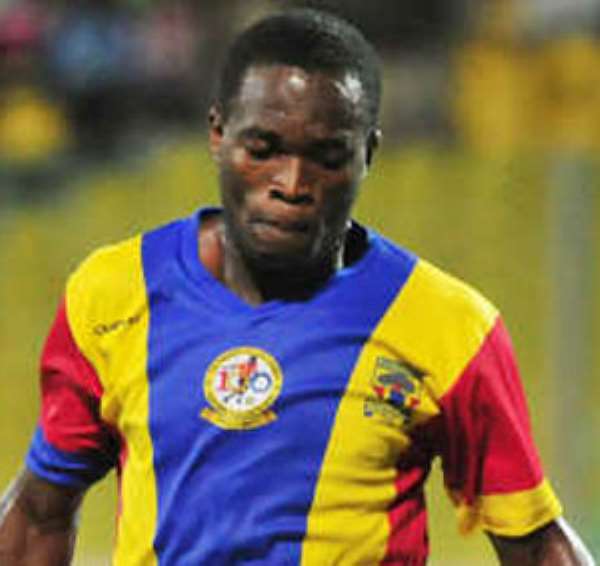 New Edubiase's marksman Emmanuel Baffour is brimming with confidence to hit the back of the net when his team hosts Hearts of Oak tomorrow in Bekwai.

With 20 goals and still counting, the striker hopes to take his tally higher with a strike against the Phobians.

The Phobians remain the only club the in-form striker has not recorded a goal against. He succeeded in scoring when Hearts hosted Edubiase in Accra but the referee disallowed the goal.

He said in an interview, 'We have prepared for the game, we are waiting for them; I have scored in almost every game, and hoping to score on Sunday.'

Baffour has missed just three games in the season and says he is not relenting. And like his prediction to score against Kotoko came to pass, so has he predicted to make things miserable for the visitors.

Certainly, that dream will not come on a silver platter considering that Hearts have returned to winning ways, beating Dunkwa United in a mid-week FA clash, and their resolve to grab a second consolation position makes the Bekwai clash dicey.

It has emerged from the camp of the Red Army that they will not be considerate despite their opponent's plight. In fact, Kotoko are a win away from winning the league, and that appears to be the motivation to go all out.

Elsewhere, Liberty Professionals will be the guests of second-placed Ashgold, while Tema Youth travel to Tarkwa to battle Medeama.

Today at the Carl Reindorf Park, Ebusua Dwarfs will begin their 12-home match ban by hosting another relegation threatened side, Mighty Jets.

The game involving Berekum Chelsea and Wassaman United has been pushed forward due to the former's continental assignment.