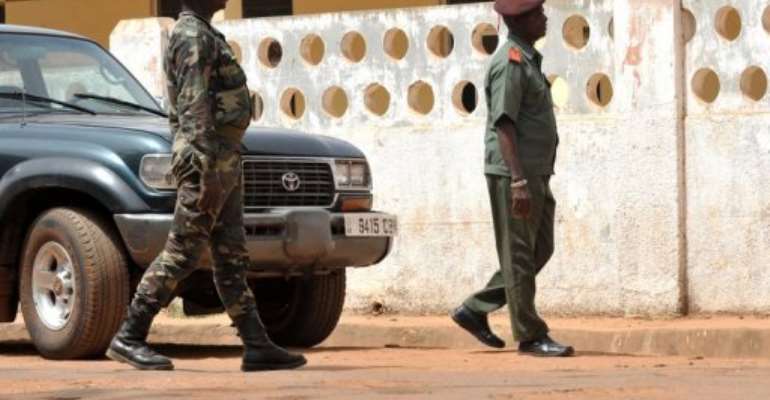 Soldiers stand guard in front of the Army Sporting Club. By Seyllou (AFP/File)

DAKAR (AFP) - The junta in Guinea Bissau on Saturday said its plan for a two-year transition had only been a suggestion, in an apparent climbdown following threats of UN and regional sanctions.

Hours afterwards the opposition politician picked as transitional president by the junta told AFP he was turning down what he described as an "illegal" appointment.

"It was only a proposal, not an official announcement," junta spokesman Lieutenant-Colonel Daba Da Walna told AFP by phone from Bissau, in reference to plans for a lengthy transition before a return to democracy.

The junta has come under fire from the United Nations and the west African regional grouping ECOWAS for failing to restore civilian rule after an April 12 military coup.

The UN Security Council on Saturday threatened "targeted sanctions" if the junta did not step down and return civilians to power, reiterating its "strong condemnation" of the coup in the tiny west African state.

It demanded the "immediate restoration of the constitutional order as well as the reinstatement of the legitimate government of Guinea-Bissau," rejecting the two-year transitional council proposed by the junta.

Manuel Serifo Nhamadjo, named as transitional president by the junta, came third in the first round of a presidential election aborted by the coup and was thus eliminated from the second-round run-off.

On Friday he had protested that he had not been consulted over the move. And shortly after the junta's apparent backtracking on Saturday he declared that he would not be taking the job.

"I do not accept this appointment," he said.

"I am a defender of the rule of law and I do not recognise any institution created outside the law," he added, speaking by telephone from the parliament building in Bissau.

Da Walna, meanwhile, asked about the fate of ousted leaders interim President Raimundo Pereira and Prime Minister Carlos Gomes Junior, repeated that they would be released as soon as security allowed it.

"We do not want them to become victims of any private vengeance or reprisals. We are committed to protecting people's lives," he said.

Da Walna said they could be released over the next week but dismissed as "premature" the possibility of a resumption of the electoral process interrupted by the coup.

Also Saturday, Guinean Foreign Minister Edouard Nyankoi Lamah said an ECOWAS summit on the crisis, set for Monday in Conakry, had been cancelled because of the junta's intransigence.

The decision to scrap the summit was made "following the junta's grave decision to name a president, set up a transitional council and provide for a two-year transition," Lamah told AFP.

The Security Council also demanded "the immediate and unconditional release" of Pereira, Gomes and several other top officials.

Defying calls for a return to democracy, the junta struck a deal with opposition parties for the two-year transition period which excludes the former ruling African Party for the Independence of Guinea and Cape Verde (PAIGC) and smaller allied parties.

Gomes had been tipped to win the second round of a presidential election set for April 29 in the coup-prone country of 1.6 million people.

In Lisbon, nearly 200 people people, mostly from Guinea Bissau protested against the coup.

"Our people must rise up and say no," Mamadou Djalo Pires, who was foreign minister in the ousted government, told the rally.

"It is the people who give legitimacy to the organs of state not violence," he said.

Portuguese Foreign Minister Paulo Portas warned that "those who continue to violate the constitution, hold the prime minister and president and destroy ballot papers will have to answer for their acts."

A separate protest took place in the central Portuguese town of Coimbra.

But those who backed down would receive "different treatment", he added.

Since 1998, the former Portuguese colony has been through one war, four military coups and the murder of one president and four military chiefs-of-staff. No president has ever completed a full term in office.

This has allowed cocaine traffickers to exploit the struggling state as a transit point for cocaine being moved from Latin America into Europe.