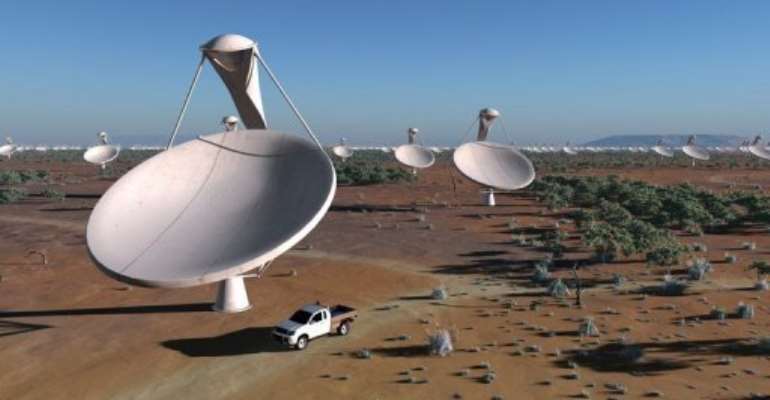 PARIS (AFP) - Plans to build the world's most powerful radio telescope are looking at whether the site can be split between rival bidders South Africa and Australia, organisers said on Thursday.

The two countries are waiting anxiously on the decision where the Square Kilometre Array (SKA), a $2-billion scheme conceived back in 1991, will be located.

Earlier this month, the project's parent body, the SKA Organisation, pencilled a meeting for the end of May to give time to let a working group examine the bids further.

Speaking to AFP on Thursday, John Womersley, head of the SKA's board of directors, said the panel was exploring whether it was feasible to split the telescope between the two countries.

"We are seeing if there are ways in which one could install SKA infrastructure in both Australia and South Africa that would make sense scientifically," Womersley said in an interview from Manchester, England, where the SKA is headquartered.

"But it's key that any solution... must not compromise the science or increase the costs in any unaffordable way."

Scientists hope the SKA, which will be 50 times more sensitive than today's most powerful radio telescopes, will shed new light on fundamental questions about the Universe, including how it began and why it is expanding.

The telescope, designed to be fully operational in 2024, will comprise a vast, dispersed forest of about a thousand antennae which suck radio signals out of the sky.

It will also need unprecedented computing power -- the equivalent processing ability of 100 million PCs -- to crunch this data to detect signs of ancient stars and galaxies.

"You could imagine technically splitting it and installing it in different places, but that would create significant challenges in terms of bringing all the data together, in terms of operating such a split facility and in having the infrastructure and the computing at two locations," Womersley said.

"It's not straightforward to know if this is a good idea or not and it was felt to be something that needed to be looked into with a little bit more than the back of an envelope."

Eight countries are full members of the SKA consortium, including Australia and South Africa.

Reflecting the rising interest of emerging countries in big science projects, China also is a full member and India is an associate member, Womersley said.

The United States, which is facing budget constraints, is not a participant.