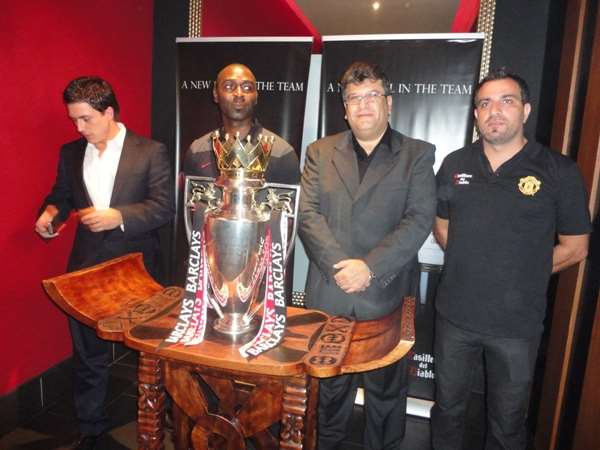 Accra, April 16, GNA - Manchester United, elated current holders of the English Premier League Trophy, at the weekend displayed their invaluable prize in Ghana to the delight of their local fans, many of whom seized the rare opportunity to take pictures with the trophy.

The worldwide tour of the cup, sponsored by Casillero del Diablo, manufacturers of a globally branded wine, is accompanied by 41-year-old Andrew Alexander Cole, a Nottingham born retired English Footballer and other officials of the club, such as the Club mascot, Fred the Red.

The ceremony was accompanied by a reception hosted by Chase Restaurant Lounge in Accra and attracted a cross-section of people, including journalists and football fans who took turns posing for pictures with Andy Cole, a member of the Club's treble winning squad.

In 1998–99, the club won a "Treble" of the Premier League, the FA Cup and the UEFA Champions League which was an unprecedented feat for an English club.

Nick-named the Red Devils, Manchester United is one of the wealthiest and most widely supported football teams in the world.

They stunned the football world in January 1995 with the then British record capture of Andy in a record seven million pounds deal.

Andrew plundered 24 goals during 1998- 1999 including the delicate lob over Tottenham's Ian Walker, which secured the Premier League title.

He followed the Treble with two more leagues titles and intercontinental cup, prior to joining Blackburn Rovers in December 2001.

Mr Fouad Nasser, Managing Director of Grafitec as well as the proprietor of Chase Restaurant and Lounge, commended Manchester United and Casillero del Diablo for their track record over the years and said he was delighted to associate his business with successful brands.

“Grafitec and Chase strive for success so we are happy to partner with other successful businesses and brands,” he stressed.

Moises Del Rio, Country Manager of Vina Conchay Toro, said: “each Casillero del Diablo wine is the result of carefully selected grapes grown in some of Chile's most award-winning wine-making regions, from the Limari Valley in the North to the Maule Valley in the South of Chile.”

“The unique characteristics of each of our vineyards are reflected within the flavours and aromas of each bottle. This range of wines brings to you the best that Chile has to offer,” he noted.

Casillero de Diablo means cellar of the devil… legend has it that over a century has passed since Don Melchor created the legend.

When he discovered the loss of his finest Concha y Toro wines, he spread the word that the devil lived in his cellar. From that day, the wine has been known as Casillero del Diablo, the devil's cellar.

“Essentially, we share the pursuit of excellence, tradition and quality of Manchester United, and like United, dominate our field of endeavour.”

We both have the word Devil associated with our brands – The Cellar of the Devil and the Red Devils - and like a football team of 11 warriors on the field we also have a variety of 11 quality wines.

“The significance of the event was to show the partnership between the two brands and to re-launch our product in Ghana. Playing on words, we could say that the Red Devils drink Devils Red wine.

The programme offered an opportunity for guests to taste our products, in this case Siemonor Blanc and the Melor,” says the Country Manager of Vina Conchay Toro.