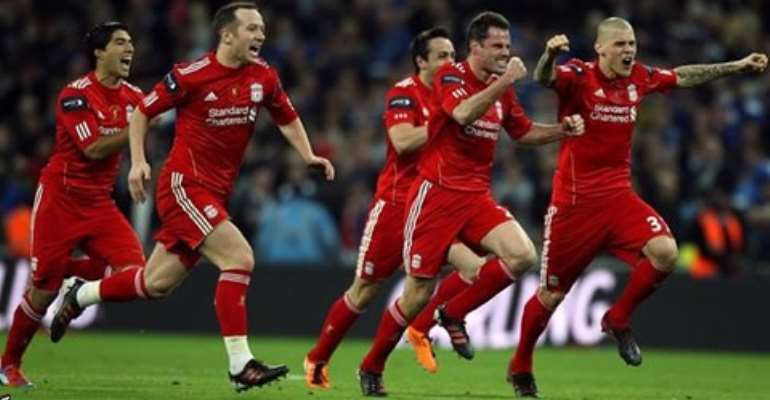 Maxi Rodriguez twice scored from close range before keeper Alexander Doni was sent off and a penalty awarded.

The Rovers striker struck with a header and a second-half equaliser from the spot before Carroll's late header.

The £35m striker's intervention, from Daniel Agger's knockdown, capped an incident-packed 90 minutes and earned Liverpool only their second win in nine top-flight games.

While Reds manager Kenny Dalglish could not hide his delight as he skipped down the touchline, Rovers boss Steve Kean cut a forlorn figure as Blackburn remain in the bottom three courtesy of QPR's better goal difference.

In the build-up to this game, Dalglish had promised Liverpool would not be distracted by thoughts of Saturday's Merseyside derby in the FA Cup semi-final.

But the Wembley date was suddenly uppermost in Reds minds once Doni carelessly upended Junior Hoilett after a tame backpass by teenage right-back Jon Flanagan fell woefully short, resulting in a straight red for the Brazilian.

Australian keeper Jones immediately came on, replacing the unfortunate Flanagan, and with first-choice Pepe Reina already suspended after his dismissal against Newcastle last month, it will be the 31-year-old who will walk out to face Everton at Wembley on Saturday.

Jones, making his Premier League debut for the Reds, instantly became a hero at Ewood Park as he stopped Yakubu's weak penalty to protect a two-goal advantage established by Maxi's two early strikes.

But Jones's good work was undone after the break when he conceded a second spot-kick in calamitous fashion, first seeing his attempted clearance charged down by the advancing Yakubu then, having palmed away the rebound, pushing the Nigerian to the ground before he could pursue the loose ball.

On this occasion, referee Anthony Taylor was content to produce just a yellow card, otherwise Liverpool's prospects - on the night and at the weekend - would have been even more perilous.

However, Yakubu - whose unmarked header had halved the arrears before the interval - made no mistake with his second penalty to bring the scores level.

It looked like rescuing what had seemed an unlikely point for the hosts after they were inexplicably caught napping twice within the opening 16 minutes, Argentine midfielder Maxi making the most of his first top-flight start in almost three months.

Martin Skrtel's 60-yard pass out of his own penalty area picked out an unmarked Bellamy, who surged clear of a floundering Blackburn backline and cut the ball across to Maxi for the simplest of tap-ins.

Yakubu's brace in reply seemed to have earned Rovers the point that would have lifted them out of the bottom three.

But Carroll's winner means it is now four straight defeats for the Lancashire side, with the only consolation for their manager that it was owners Venky's, and not Kean himself, at whom the home crowd chose to vent their spleen on the final whistle.