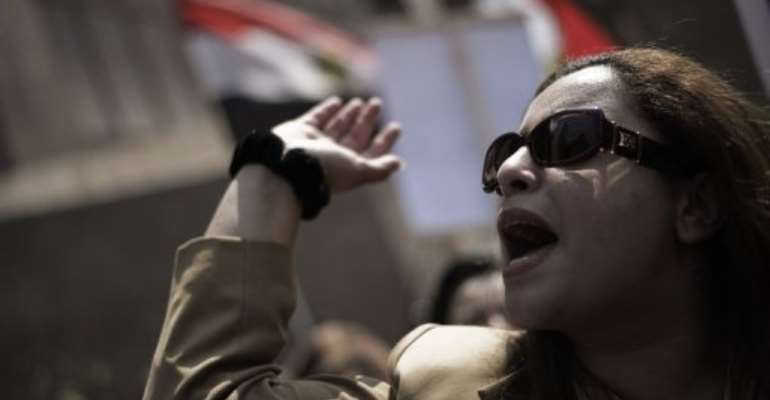 An Egyptian protester demonstrates outside the administrative court in Cairo. By Gianluigi Guercia (AFP/File)

CAIRO (AFP) - An Egyptian court suspended on Tuesday the Islamist-dominated commission tasked with drafting a new constitution amid a boycott by liberals, moderate Muslims and the Coptic church.

The administrative court in Cairo said it was "suspending the constituent assembly" without explaining the reasons,but lawyers and liberal political parties had filed a complaint accusing the Islamist-majority parliament, which formed the panel, of having abused its powers.

The decision comes amid a tense standoff between Islamist and secular forces just six weeks ahead of the country's first post-revolution presidential elections.

Mohammed Nur Farhat, a lawyer and official of the liberal Social Democratic Party said the "constitutional commission has been made null and void by this judicial decision and may not continue its work.

"Parliament must meet to re-form the constitutional commission, and we invite it to begin setting out the criteria that will guarantee an equitable representation of social and political forces, so that it is not dominated by a single political current," he added.

The 100-member panel, which is evenly divided between parliamentarians and public figures, was elected by the parliament, which also voted for a number of reserve candidates who could could replace the panelists.

But most of its members are from the Muslim Brotherhood and Salafist fundamentalists who hold the majority in both houses of parliament.

The secular parties have already withdrawn from the commission, believing that their presence was only used as a smoke screen allowing the Islamists to draft a basic law that reflects their political-religious ideologies.

The prestigious Sunni Islamic institution, Al-Azhar, and the Coptic Orthodox Church of Egypt have also decided to boycott the panel.

Islamists believe the commission should reflect the composition of a parliament, where the Muslim Brotherhood's Freedom and Justice Party (FJP) holds nearly half the seats and the Salafists Al-Nur party almost one quarter.

The secularists want a more balanced commission, fearing that the Islamist grip would lead to the strengthening of a demand for Islamic sharia law to be the point of reference for legislation.

On Tuesday, around 150 people demonstrated outside the offices of the State Council, which has the power to rule on administrative disputes, to protest against Islamist control of the constitutional project.

One banner proclaimed: "The constitution is not a matter of majorities. Egypt will remain a civil state."

Another read: "There are (entities) that cannot be trusted -- the army and the Muslim Brotherhood."

A junta known as the Supreme Council of the Armed Forces has ruled Egypt since a popular uprising toppled long-time president Hosni Mubarak in February 2011.

The SCAF is overseeing the transition to democratic civilian rule, which has already seen the election of a new parliament and will see presidential elections beginning in late May.

When the Coptic church, whose faithful make up about 10 percent of Egypt's population, withdrew from the panel its Holy Synod said it considered it "inappropriate to continue to be represented given the reservations of various political forces on how the constitutional commission was composed."

Egypt's Supreme Constitutional Court also pulled out, expressing "doubts and confusion" over the make-up of the panel," while Al-Azhar said it did not consider itself properly represented.

In principle, the panel has up to six months to draft a new constitution to replace the one suspended by the military when it took power last year.

The decision to suspend the panel comes amid uncertainties over who will actually be permitted to run for Egypt's presidency, with the registration of candidacies having closed on Sunday.

The constitutional process is also unlikely to be finished before elections, which are scheduled on May 23 and 24, raising fears among many of having to elect a president whose powers have not been defined.

The registration process itself has been drama-filled, particularly with the controversial announcement by the Muslim Brotherhood to field a candidate after repeatedly vowing to stay out of the race.